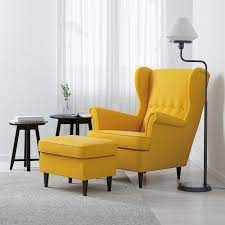 This time last year, by request, for her birthday, we went  IKEA  and bought Dau.I a wing-back chair. As a reader living a multi-function apartment, she liked the idea of limiting draughts round her ears while snuggled up with a book. This year she yearned for a matching foot-stool and so hey-ho hey-ho off to Ikea we went.

One of the themes in The Blob is to give tribs to people who are sufficiently flex to change their minds. Let that also include me! Browsing back through the archives you can detect childish delight that I could buy a serviceable book on Amazon for $0.01 . . . plus $3.99 p&p. But it looked like a better deal than $12.99 plus $3.99 p&p. But me getting suckered into the Bezos narrative has seen his empire drive local book-stores to the wall and treated their employees as expendable zero-hour contract-bots. So I don't do that any more: Kennys is my only man . . . and Borrowbox is better yet.

IKEA used to be my sort of place and we've bought a fair amount of clobber there - not to mention some bilious yellow upholstered furniture. What's not to like about Scandi-chic clean white delph? or a bright plastic and stainless cheese grater? Last year, in full chrimbo-mode, we bought cheese, rye-crackers, ginger biscuits and horse-radish sauce from their micro-deli. Walking into Ikea from the car-park I was talking up a storm of Svensk ost [no better really than LIDL's own-brand 'Maasdam' or 'Emmental']. So I was hacked off to find that cheese no longer featured in Ikea deli-inventory.

Then I got lost in Kitchenware, assumed the rest of the team was powering through to soft-furnishings and found myself in a sort of ware-house with aisle of ceiling-high shelves holding tonnes of flat-pack. In the near distance consumers were lining up for the checkouts with gurneys laden with boxes and lamp-stands. I didn't start whimpering like six-y.o. me when lost in Dingle's department store in 1960; I figured that I must have missed them in the Ikea-maze. How did folks manage before cell-phones? After some minutes and one missed call, I heard that the rest of my party were a) separated and b) still mullocking about in kitchenwares!  I went through the check-outs to double-check about the absence of cheese and and settled down to wait. At least I was warm and dry and not homeless.

It occurs to me that it would help the Lost-in-Ikea syndrome for each family to come with an easily identifiable team hat [as L] and/or a distinctive coloured jacket. Especially the hat, I guess, so that you can find your quarry over the landscape of shoulder-height shelves. But actually, I suspect that is my last time in Ikea. I have a life-time supply of dishware [unless I get badly shook with the tremors] and enough cheese-graters to see me out.  Thanks!