Diana Beresford came from a WWII mixed marriage: her father Jack was a loose leaf of the Beresfords from Waterford and her mother Eileen O'Donohue from Lisheens down Gougane Barra way, Co Cork. Diana's folks parted company and then died soon after leaving the child orphaned and a ward of court just as she reached double digits in age. She was housed in Cork City by her Uncle Patrick O'Donohue, a scholar and chemist but brought herself up: it was teaching herself to cook or starve. The household was peculiar because organised curiosity [ahem science] was absolutely normalised. How long does it take to boil a potato . . . let's find out by trying different times and keeping records. Luckily the unworldly Patrick was backed up by the fact that Diana went off to school most days where she had access to ignorance and books, antipathy and recognition.

In the Summers, meanwhile, she went to her mother's people in a rural backwater up the Owvane River valley. As it happens, we drove through Lisheens on our way to The End of the Beara Peninsula this last Summer. In Lisheens, all the young people have left . . . for the city, for Britland, for America. It's kind of hard to maintain the old ways - meitheal, scything, saving the hay, sharing the tools - if there are no fit bodies. Prior to her first orphan Summer, a coven of old people gather and resolve a) that Diana, as orphan, is a ward of the valley b) she will be vested in the accumulated knowledge of hundreds of years of embedded domesticity. No pressure, our Di! 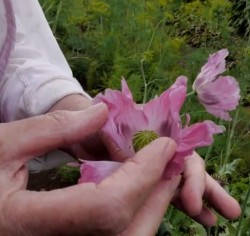 The consequence was that Diana had a unique education in science and woo and was able to jostle the two together because she was resistant to being brow-beaten by everyone knows certainties with which scientists can cloud their optics. Having an extraordinary, retentive, memory helped a lot in accumulating facts, statements and suppositions so that they could be added to the mill. That attribute also served her well in school and university where she achieved a double First from UCC in botany and medical biochemistry. It's clear from those results and other think-forward think-wide anecdotes that many times DB-K was the smartest person in the room and that discomfited older patriarchs who in those days and times [yes, yes and today!] expected people to agree with them and their complacent conservatism.

After being ground up small and spat out by a complacent and misogynistic scientific establishment, she washed up at Carrigliath, Merrickville, halfway between Ottawa and the St. Lawrence River in E Ontario. There, Diana and her husband Christian Kroeger, bought 160 acres of unproductive colonial farmland, and lived in a shed until they built their own home on the property. They started [from nothing] to create an arboretum and experimental station to improve productivity in Boreal forests as well as feeding themselves from what they could grow. A Garden for Life: The Natural Approach to Designing, Planting, and Maintaining a North Temperate Garden was the resulting book.

To Speak for The Trees: My Life’s Journey from Ancient Celtic Wisdom to a Healing Vision of the Forest is her most recent autobiographical book which I've been enjoying à la ear through Borrowbox. What is a challenge, and also A Good Thing, is that DB-K stands with one foot in Woo and the other in Science. The second half of the book relates many instances where tradition and traditional medicine have been vindicated and absorbed by modern materialistic science. For example Taxol, an alkaloid ultimately derived from yew (Taxus spp.) is accepted as a valid weapon in the fight against cancer. But a really skeptical reading will be concerned that <confirmation bias alert> we only hear about the cases where trad gets accepted. No quantitative analysis is carried out to balance these positive against the count of  bat-shit craziness which shamans, druids and healers foist on their vulnerable clients.

Her Big Project is to get every person on the planet to plant six (6!) trees. Her back-of-envelope calculation is that those 48 billion trees will sequester enough carbon to reset the clock on the climate emergency. My back-of-envelope is that I've planted about 1,000 trees . . . so I'm in Smug City and made some effort to ensure their health and survival for their first 15 years. Not too much futility planting on my conscience. Grand Plans are kinda useless unless they are backed up by some sense of the logistics of distribution . . . and an estimate for the cost of maintenance.

But, as I say, it's a good thing if the smartest peep in the room is open to thinking outside the box to give the unexpected a chance to blossom.