My mother has macular degeneration. Her retinas, particularly that at the back of her right eye, have been falling apart for at least ten years.  It’s annoying because, although her peripheral vision is okay, it is really difficult for her to read and she has been acquiring information through the printed word for more than 90 years. She really wants to read the deaths notices in the Daily Telegraph, so she can see who is left. When your eyeballs get really old they often degenerate on the front-end as well and at her annual ophthalmic check-up she was told that she had cataracts. That can be treated as an out-patient procedure and, despite being told that the QALY prospects in her case were not so good, she went ahead on the last Friday of April.  I called her the following weekend to say that I’d cleared my diary and was coming across on the ferry to see her for myself . . . because she could barely see me! She was delighted at the prospect of a visit from No.II Son and told me that the blinds in the dining room were displaying a jagged blue pattern, a sort of moiré pattern: of which explanatory video.

I interpreted this as an example of interference patterns generated by the ragged surface of her scraped corneas . . . but she continued [I paraphrase] “ . . .the old chap in the portrait over the side-board – he’s now wearing a flowered garland . . . and there’s a sailor with a hairy leg swimming in the sea beside your father’s last command . . .”  That seemed far too specific to be the result of physical distortion of the light and, as you do, I assumed that she either had a suffered a stroke or a tumor was pressing on some peculiar part of her visual cortex. 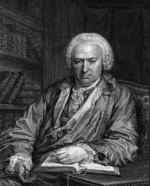 Hey, I've read The Man Who Mistook His Wife for a Hat by Oliver Sacks [video short]; but I'd be naive to believe that quite short book covered all the crazy things the human mind can dream up. My sister and sister-in-law had heard various elaborations on the unreality of what my mother was seeing and we all agreed to ask around to see what was the most likely explanation. The winner is Charles Bonnet Syndrome CBS, named for the Swiss naturalist and thinker [L, looking intelligent] who first described the peculiar symptoms experienced by his aged grandfather in 1760. The old gent was nearly blind but described in full detail visions of women, buildings, vehicles and buildings which nobody else could see.

All you need to know about CBS.  It's a bit like having a phantom limb. Your visual cortex and your eyeballs have been in a rather intense relationship for as long as you’ve been drying off outside your mother. A lot of information has bombarded your retina and these signals have causes impulses to be sent to the visual cortex at the back of your head where there have been integrated with other information from memory and experience.  The visual cortex has developed and expanded to cope with the information and if the input ceases or dies down – macular degeneration; diabetic retinopathy; glaucoma – the cortex fills in the spaces with bits and pieces of images which are hanging about with nothing better to do. My mother is ‘interested’ rather than worried, annoyed or distressed. Although it must be said she prefers the floral friezes to the hideous silently snarling oriental who makes an occasional appearance.  It’s really common: between a fifth and third of people with vision loss experience some form of CBS. And that is about what our straw-poll of friends-and-relations indicates. Ask anyone you know who is registered blind and you are quite likely to get a story similar to my mother’s.  I’d never heard of it: someone should be told – and now you, dear reader, have been.
Posted by BobTheScientist at 07:32