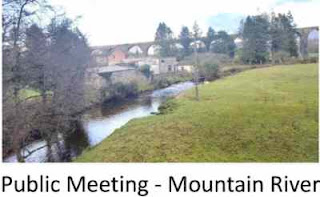 There it is [the Mountain River] running under the (locally) famous viaduct of the long defunct railway that went from Bagenalstown to Wexford between 1858 and 1947. For the last 15 years of its existence the railway operated solely for hauling sugar beet from Ballynowhere to the Sugar Factory in Carlow. The town of Borris, which runs up from the river valley, abstracts its drinking water from the Mountain River, fouls it, treats it and discharges the effluent a little further downstream. It is just as well that, like time's arrow, water flows in one direction. The Public Meeting was called, for 1930hrs 13 Feb 2019 in the boutique wee hotel at the top of the town, to encourage dialogue between ordinary people on the ground OPOGs and All Agency Experts AAEs who occasionally parachuted in to make some desultory, irregular, duplicated, uncoordinated measurements of the river before flitting off to the next project.
The Public Meeting was for Consultation on the local River Basin Management Plan RBMP [we are not nearly finished on the acronyms!]. They were hopelessly optimistic about the amount of interest in their work: the hotel's ballroom was rented and 50 wedding-reception seats were laid out in an arc; 15 OPOGs turned up only just exceeding the functionaries who had to be there to answer questions and explain what they had been doing with their time, and our money, since the Local Authority Waters Programme LAWP kicked off two years ago. The OPOGs were not exactly hostile but were certainly critical of how their tax-payers money had been, and would be, spent. The LWAB, for example, just for the Sunny SE of Ireland employs seven people to carry out audits of water quality.

How do assess the quality of river water? The quick-and-dirty way is to jump in the river and do some kick-sampling. This is what LAWPers do: they kick-sample a bucket of aquatic invertebrates out of the river and count the numbers for different key species of creepy-crawlies. If you find caddis-fly (Trichoptera spp.) [example L] and mayfly larvae, (Rhithrogena semicolorata or Ecdyonurus venosus), the water is safe to drink. If they are absent you may not know exactly what's gone wrong with the ecosystem but you know it is poor quality. You could be much more expensive and "scientific": quantify the metals with AAS or FES; measure the nitrates; the Biological Oxygen Demand BOD; TriHaloMethane THM . . . but that would take time, kit and money. otoh, you're not better off by checking for key mammals like otters Lutra lutra: because that species is rare there is not enough granularity in the data. After the talk Ipulled on the lapel of the head LAWPer to suggest that kick-sampling and counting caddis-fly larvae is sooooo 19thC and salary-time-consuming. Why not, I suggested, take a sample of water + river-bottom and run it through a DNA sequencer. It is so cheap to sequence DNA now  and that will give you an estimate, not only of the countable invertebrates but also, of the microbial community . . . and probably the fish species as well from the fish-shit. Concentrating on the countable is a classic example of street-light science: it gives you a handle on what's easily available which may be almost irrelevant to a true measure of biological diversity or water-quality.
It was clear that DNA analysis hasn't arrived in LAWP-land yet - if it ever will. I therefore switched tack and asked what they were doing about [measuring, legislating for, informing the County Council] light-pollution. Here I must confess that I was channelling my pal Rene from St Mullins who, before he left the Netherlands 25+ years ago, was fattened on eels Anguilla anguilla. When he arrived in St Mullins on the River Barrow in the early 1990s, eels were plentiful. When they came back from the Wild Sargasso Sea as hatchlings, some of them turned right and swam up up the Mill Stream in search of a new home. Then the County Council installed a street-light on the narrow road bridge that crosses the stream as it met the Barrow. That was end of eels up the Mill Stream - they travel at night, avoiding light, which exposes them to predators. Same thing happens where the Mountain River goes under Main Street in Borris. Light and Dark are natural! they happen every 24 hours many / most / all animals have adapted to the change. Now, for the trifling convenience of people walking to the pub at night, we have daylight all night with utterly unconsidered consequences for the natural world.
Posted by BobTheScientist at 07:24