Maude Delap was a real water ecobiologist who embraced a life in the wet.  Yesterday, I went off-site pretending to be a freshwater ecologist with ο συνάδελφός with whom I share my office and the Yr4 Environmental Chemists. We motored North in convoy to the picturesque village of  Castledermot which, given the Irish name Diseart Diarmad, could have been translated less war-like as Dermot's Hermitage.  The River Lerr skirts the East fringe of the village and is conveniently accessible if you wish to sample a fresh-water ecosystem.  My EnvChems have measured water quality in the lab (nitrate, pH, turbidity).  But these measures, although sciencey, are only surrogates for the actual quality of the water as measured by the type and number of invertebrates that are prepared to live in it.  Ecologists divvy up the species into several bands according to their tolerance of lower oxygen levels, pH and concentration of miscellaneous toxins.  They then identify these sentinel species and count them. For example, red Chironomus (a dipteran midge) indicate poorer water quality while green Chironomus are only found in well oxygenated water.  We know this already because it's the red ones that you find in your stagnant water-butt. 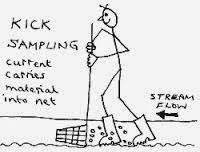 The technique we used was a form of stream-dipping called kick-sampling (see left) which requires you to plant your feet and a collecting net on the stream-bed and shuffle your boots about to dislodge the livestock, which will get swept down current into the net.  We brought four broad 60 x 50 x 10cm white plastic trays to empty the catch into and were able to carry out a preliminary (!positive!) assessment of the water quality by finding caddis-fly (Trichoptera) and mayfly larvae, (often Rhithrogena semicolorata or Ecdyonurus venosus).  The common names for Mayflies - there are 33 different species native to Ireland - sound, for obvious reasons, like the things fly-fishermen make out of silk and wire: Large Green Dun, Angler's Curse, Pond Olive, Dusky Yellowstreak etc. In many European languages Mayflies are named for their ephemeral nature, (they often become adult, mate and die in a single 24hrs period):  German Eintagsfliege, Dutch eendagsvlieg, Slovenian enodnevnica, Swedish dagslända, Danish and Norwegian døgnflue, Polish jętka jednodniówka, Latvian viendienītes, Finnish päivänkorento, Hebrew בַּריוֹם, Turkish birgün sineği, Russian подёнка, Ukrainian поденка, Bulgarian еднодневка, and Greek εφήμερος. The Greek name, transliterated ephḗmeros (Modern Greek: [eˈfimeɾos]), is the origin of the names in Romance languages: French éphémère, Italian effimera, Portuguese efêmera, Spanish efímera, and Romanian efemeride. The EnvChems spend part of the afternoon identifying the small creatures they had caught using a dichotomous key.

If the cartoon chappy above looks like he's just about to fill his boots it's because he is just about to fill his boots!  As happened to one of the three people who brought regular length wellingtons. On instruction, I had brought my father's old waders and a spare pair of wellington boots, which was just as well because half the students came in their trainers, and only one of them was half-willing to get into the stream bare-foot.  But when I stepped into the water to help with the sampling I had an ominous sensation of wet-sock and didn't hang about in there waiting for the perished rubber to fail - those waders must be at least 50 years old. It's a Good Thing to get out in the fresh-air and we were lucky with the weather - getting an hour beside and in the water between showers:
Posted by BobTheScientist at 06:06