What's the Russian for schism?

A. схизма
. . . but it's exactly the same word in Ukrainian - indeed it's the same word in English except for the cyrillic / roman lettering. In the West we have heard rumblings of conflict on the far side of the continent as Ukraine and Russia throw shapes (and artillery rounds, it must be said) to determine who rules what. The Crimea having been annexed by Russia in 2014 despite being part of the Ukrainian SSR from 1954 until 1991 when Ukraine became independent of its larger Eastern neighbour. More than 50% of the inhabitants of the peninsula being ethnic Russians. Two Eastern Oblasts of Ukraine, Donetsk and Luhansk, with the highest proportions of ethnic Russians, seceded from the union in 2014 as  Доне́цкая Наро́дная Респу́блика and Луганська Народна Республіка. They are now reintegrated with a mixture of wall-paper, string, and hope. There are parallels with Brexit where half the people in the UK want to sever ties with Europe and return to a 1913 era Edwardian tea party on the lawn.The other half want to go back to 2013 when Brexit was but a fantastic pipe dream by the Edwardians. 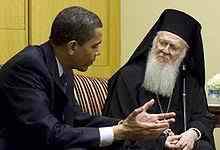 Recently Πατριάρχης Βαρθολομαῖος Α aka Patriarch Bartholomaeus I has been throwing his weight into the scales of unrest.  Who he? Wot Weight? He is the 270th Archbishop of Constantinople and Ecumenical Patriarch of the Orthodox Church. That post has an office in Byzantium / Constantinople / Istanbul but can only be held by a Turkish citizen. Bart was born, ethnic Greek, on Imbros in 1940 when the island was politically part of Turkey despite being mostly inhabited by Greek speakers; so he ticks that box. Most of the Greeks of Imbros have since left and the island has been more closely integrated with the mainland - getting renamed Gökçeada to show this fact more clearly.

His weight is that of a feather against the soul of man. The Orthodox church separated from Rome in the Great Schism of 1054. One of the unsticking points was Credo . . . et in Spiritum Sanctum, Dominum et vivificantem: qui ex Patre ⟨Filioque⟩ procedit: whether the holy spirit proceeds from the father [the Greek position] or father-and-son [preferred by adherents of Rome]. Oh that Trinity, the cause of so much disagreement and bloodshed. [No! not that Trinity] The Orthodox church has many independent Patriarchs each with their own parish but the historical importance of Constantinople to Christendom allows Bart to be treated as Primus inter Pares - the first amongst equals - by his patriarchal colleagues.

There are fourteen Autocephalous [with its own head] Churches under the Orthodox umbrella:
Not everyone, and certainly not the Russians, recognise the autocephaly of the church in America which was under the watchful eye of Mother Russia, in the same way as adherents in China and Japan. In 1970, Bart's predecessor promoted America to the First Division; an assignment still not accepted by the Russian Patriarch. And now since 5th January the Ukrainian church has been liberated from the over-view of Russia by Bart. It is impossible to believe that this last move is wholly independent of schismatic events in Crimea, Donetsk and Luhansk.

There is a small Orthodox community in Ireland that used to be mostly expatriate Greeks, of which there are less than 1,000 in Ireland. Since Romania joined the EU, many have fled West and there are now more than 10,000 here. Orthodox Romanians have been giving voice to their version of the creed to the discomfiture of the Greek community. You can catch some mighty Gregorian chant at their Dublin 7 church, formerly Victoria Kindergarten School [shown R].
Posted by BobTheScientist at 07:37