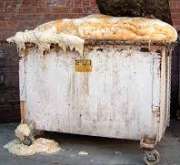 I grew up in the Genetics Department in TCD where we were taught to 'treasure your exceptions' - that variety, difference, was where the interest was.  The rival department was Biochemistry and I characterised their whole endeavour as "They go to the abattoir and get a skip-load of calf thymus [see Right], run it through blenders and sieves, purity columns and filters to get 2 grams of active principle. They then write the paper as discovery of the mammalian enzyme for wuggawugganess". They ignored all the lovely, intriguing, interesting variability!! Not only any difference among the contRIPutory calves, but also among the different mammalian species which last had a common ancestor 60 million years ago.  Nevertheless, it was a similar bucket scale protocol that isolated insulin as a treatment for diabetes; so it wasn't a total busted flush as science goes.

Fast forward 20 years and I was employed in the Biochemistry Department, pushing different frontiers of science and realising that I'd have to eat my earlier sniffiness because my new colleagues were every bit as sharp as the lads from Genetics. The Gaffer was the Professor of Comparative Immunology and I brought an evolutionary / genetics view-point to the project. Which was to investigate how different species had different immune responses to the same insult, probably because each lived in a different ecological niche and was beset by a different cast of microbial thousands. OR to investigate how the same species reacted differently to different pathogens. OR both . . . although was going to be complicated to set up. In about 2007 our second grant application to the Department of Agriculture was for a comparative immunology study to measure the immune responses of chickens to a virus, a bacterium and a protozoan parasite. That would have addressed some of the subtlety of immune response. But as we costed out the trials, the replicates, the hands to run the equipment, their taxes and social security contributions the numb€r$ far far over-topped the limits set by the DoAg and we had to pull in our horns. In the end, 10 person years of solid work and €500,000 of tax-payers money made some modest contribution to understanding what happens when chicks are exposed to the bacterium Campylobacter jejuni. With the limited funding and clunky tools-of-the-day, we hauled out the caecum from a bunch of chickens - some infected and some not - and analysed its contents (count them bugs) and also measured which genes in the caecum were being switched on (and off) in response to the bacterial burden. We flagged a bunch of immune-related genes which were differentially expressed in infected and uninfected birds and were just delighted with ourselves.

The paper was published five years ago. Instead  of processing a skip-load of calf thymus to identify and quantify a single molecule that was in vanishingly small quantities [we're almost all water, after all]; we dissected out a lump of wet tissue from a single chicken and measured the concentration of some thousands of genes. That scaling up has been exposed as crude, medieval, against today's standards. A study in last week's Nature has analysed the genetic repertoire of 50,000 single cells from the intestinal epithelium! In my immunological day, we could process white blood cells with an instrument called a flow cytometer. This would flick cells left and right and count them according to what proteins poked out of the cell membrane. The current study un-glues the cells lining the gut and measures each one's genetic activity. That's a level of precision that is truly astonishing, which is why it is published in Nature,  but will look completely normal and even expected in 5 years time.  All those genes in all those cells makes this an example of Big Science: far too much information to read, let alone tally up or assess. without the help of some hefty compute power. The picture [R] is not a Rand-McNally map of the counties of Antarctica; it is rather the first step in the process of making sense of the gut-cell genes. The X and Y axes are the two most informative trends in a multivariate statistical analysis, the diagram shows that known cell-types - goblet cells (island to the L), brush cells (smaller island R) - are not only similar in shape and function (we knew that, it's why they have been given identifying names) but also have very similar genetic profiles. 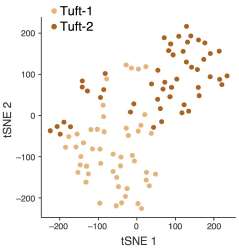 But it turns out that we made some mistakes when lumping things in the same bin just because they looked similar. We've made this sort of classificatory error before with giraffes - rhinos - elephants and other species. Well it turns out that brush cells aka tuft cells are really two quite different cell types that have rather different gene expression profile [see R pale and dark] and probably therefore have rather different function although it's hard to tell them apart under the microscope. Tuft-1 seems to own neuronal development while Tuft-2 are more down with inflammation. That explains why these two quite disparate functions were associated with 'tuft cells'. We'd be wrong if we classified people-with-helmets as essentially the same: policemen and fire-fighters and motor-cycle couriers and construction workers do different things: the only thing they have in common is an occupational need to protect the head. Tuft-2 cells are all lit up with CD45 which had previously only been associated withe the T- and B-cells of the immune system.

This would be enough for normal people to rest on their laurels but there's much more. And you may bet that, after the flag-ship Nature paper there will be a fleet of filler-of-detail and explore-new-avenue papers over the next tuthree years. Here, as a taster, they show a quite different response to infection by the bacterium Salmonella and the nematode worm Heligmosomoides polygyrus. Whatever about the gene up-regulation profile, it seems that the complement of epithelial cells changes significantly under the two different assaults. Salmonella induces the development of more Paneth cells which then blurf out anti-microbial peptides; H. polygyrus otoh triggers the growth of goblet- and tuft-cells which mount an appropriate response to nematode infection. I think it shows that we would have been 'at nothing' with our blunt instrument approach to different infections. Treating great lumps of tissue as 'essentially the same' and measuring anything about their function rides rough-shod over the subtle cell-by-cell difference in response that is essential to the maintenance of homeostasis against pathogens. It's like you put the entire contents of the Etihad stadium, spectators, astro-turf, goal-posts and all into a blender. . . and are then surprised that you cannot identify the importance of the football.
Posted by BobTheScientist at 07:36