A lot of old cobblers

You may have guessed that Bob T Scientist is Phnom de Penh and that I have a day job and a real name.  It's not super common, but it's not a rare combo of First and Last names. Accordingly, it is sometimes quite hard to get credit for my contributions to science.
Imagine if your name was John Smith or Jean Dupont, it would nice to have a mark that would distinguish you from your nominal clones. Every so often, maybe twice a year, someone asks me for an up to date list of my scientific publications and I check Pubmed with Scientist BT then I do Scientist BT [AU] because the first search is clearly over-egging the pudding, to see if anything new has appeared. With my two-week event horizon, I can't be expected to remember a paper on which I was 4th author out of 12, so it is as well to check. Unfortunately specifying the T sensibly excludes Scientist B [AU] and I've have been known to submit a list of pubs that is one or two short. And y'know what? the sky does not fall!

ANNyway about 5 years ago, someone had the idea, not for the first time to hang a unique author-ID on everyone who publishes in science. This project seized on a somewhat unfortunate Acronym ORCID for Open Researcher and Contributor ID. Before the Summer, all the active researchers were gathered into a [small] room at The Institute and more or less ordered to set up an ORCID account and capture our publications. For youngsters this was the work of moments, for an old stager like me if was a bit more work. It wasn't so much that my publishing career goes back through 7 working addresses in 3 countries it was more that ORCID uses a rather wide net for 'contribution'. For several years at the turn of the century I was the book review editor for a journal and would often enough keep the free book by writing the review myself. These were Blobs in all but name before The Blob had been thought of, and have at least one nugget of peculiarity in each one. But I cannot remember them all; not to save my wife. 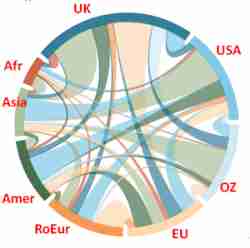 This all came rushing back to me before Christmas when I was up in Dublin and picked up an old copy of Science while waiting for the next meeting.  John Bohannon a piece in there about mobilising The Data for ORCID to investigate migratory scientists. And why not? There are now 4 million people registered on ORCID which is about 1% of those using LinkedIn. If you have an identifiable researcher, with all their past publications and all their past addresses, then you can mashup the data and do some hypothesis driven sociological research.
= Do successful scientists move about a lot? [maybe]
= Which country exports the most PhDs ?[the UK by far]
= Can we generate some truly appalling graphics ?[yes R]
It is impossible to deduce from the picture which direction the migrants are travelling. The print version is much better.

The best thing I discovered in finding out about ORCID is that they have a nominal place-holder to run trials for up-grading the software. This is an old science hand called Joe Carberry who has been investigating psychoceramics at Brown U since 1930.  At that time he was billed to give a lecture on "Archaic Greek Architectural Revetments in Connection with Ionian Philology" and the bugger never turned up. Ever since on Friday the 13th and February 29th, cracked pots [psychoceramics, geddit] appear all over campus and students fill them with small change to promote the Life and Works of Professor Carberry. In reality the Brown library uses the money to purchase books for their collection. All good fun and these additional books are given a special bookplate with the slogan  "Dulce et decorum est desipere in loco" [It's okay to be silly once in a while]. For example, the psychoceramics lab has investigated whether you need to wash your tea-cup at the office. 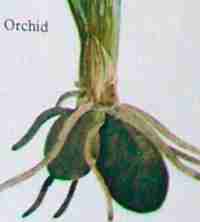 I suggested above that ORCID was an unfortunate coinage but only because όρχις = orchis is the Greek for testicle. Men of a certain age will know the word orchidectomy as a solution (hopefully unilateral) to testicular cancer.  And you'll now be curious about the family of exotic plants are called Orchids. It is so called because the type species sports two peculiar tubers [R] from the base of the plant. To Aristotle and other ancient naturalists, these looked enough like testes to name the family. And while we are down there, you might be amused by this joke.
Note for inglês segunda língua folks: a lot of old cobblers = harmless nonsense from rhyming slang [prev] cobblers awls = balls.
Posted by BobTheScientist at 08:01