St. Stephen's Day, when we have a second go at the food.

This story needs some background music, so you might open Le Boudin in another tab for the five minutes it will take you to read about John Paul O'Connor [above] who makes white pudding within sight of Carrauntoohill [above] in Co Kerry.  I met him the other day in Tramore. I was looking after Pat the Salt and nipped up to Supervalu to buy some bread and milk . . . and came away with 250g of white pudding. Hard to refuse a man who has driven 200km to sell something that he believes in. Very nice it was too: it even got a 'like' from The Beloved and she's a vegetarian. O'Connor is about my age, but he missed out on the very expensive education bit; indeed he left school and left the country when he was 13 to go and work in England. One of his jobs was in a sausage factory in London, before he got his start in construction. He has erected steel all over the British Isles and also across the pond in America. The boom was good to him and in 2007 he was employing not only himself but 20 others besides. We treat our entrepreneurs shockin' poor in this country, expecting them to take all the risks, take people off the live register, and put money aside for retirement or disaster.

Everyone was washed up and laid off in the Crash.  In 2012, when the last sliver of construction had worked itself through, O'Connor looked across the kitchen table at his wife Kathleen and they agreed they were too old to emigrate again. They decided that they could make a better sausage than the dreadful concoction they had a hand in when they were young - turns out that she had also worked in the sausage trade in London. 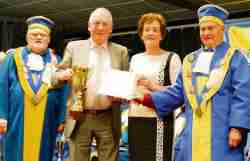 They'd been in business for less than a year when they entered their products in a competition organised by the Harry Potter School of Food Wizardry Commanderie des Goustiers du Duché  d'Alençon in Normandy and came away with a Best in British Isles cup and certificate. [L with M.Dupont et M.Dumbledore].  The O'Connors have decided to take Sásta Sausages and Puddings up-market rather than competing with the Big Boys on price. That way they'll be able to keep the quality of their ingredients high. Unless you're starvin' you wouldn't want to go down-market with sausage. I had a choking revelation in Boston  when I read the ToC for hot-dogs after I had eaten half a packet: what in heck are chicken non-meat byproducts? apart from being pink? Sásta puddings retail at €12/kg compared to Tesco Finest at €3.34/kg. If you treat meat as a condiment to the calories, like Thomas Jefferson, then you'll be able to justify paying for something that is genuine. Quite apart from supporting a company (and all its employees) that wouldn't exist but for a couple with conviction, courage and a good product.

The puff on the packet claims that the recipe is inspired by JP's grand-mother who used to lash in gorse flowers Ulex europaeus and wild garlic Allium ursinum. That would be interesting, gorse smells of coconut with a hint of vanilla, and ramsons A. ursinum would make your eyes water at ten paces. So I've left pictures of those Summer flowers up [R] so that their whiff will beguile you while you read the modern ingredients:
Pork (80%), onion, pinhead oatmeal, water, rusk (wheat flour, water, salt), spice mix (wheat flour, rusk (wheat), salt, soya flour, preservative sodium metabisulphite, emulsifier: sodium tripolyphosphate, spice and spice extracts, antioxidant E301, rapeseed oil, herbs and herb extracts, flavour enhancer E621).
Notes:
The most striking element of this recipe is the fact that the main ingredient by far is pork. You might compare the list with that of spice burgers [9% meat] or Irish sausages [70% meat]. But unless you're a fan of Frank Herbert's Dune, you'll be less impressed with spice and spice extracts and herbs and herb extracts. If you're going up-market you don't have to rely on generic catering-pack herbs and spices. You could try simplify simplify and make a truly rustique gastronomique food like my much loved caldo verde. Use cracked black pepper not spice and gorse flower and allium not herbs. That would be distinctive and a bit brave.
Posted by BobTheScientist at 07:53