[You're getting this because of a weird blogspot glitch. I wrote an earlier version of this piece but when I pressed the [publish] button the thing disappeared from 'drafts' but failed to appear on the website. So I sat  down to recreate the post while it was still fresh in my 'memory'. An hour and a half later, I recd an e-mail from one of the handful of folks who get Blobs delivered, at their request, by e-mail a) saying thanks and b) attaching the whole text of the lost ms. Turns out that the recreated rewrite was pretty close [see alignment at bottom].  So apologies if you've seen something very similar to this before. Further investigation showed that the post, launched on 7th October was somehow published with a date of 28th September; probably because I messed up on 'scheduling']
Mais revenons a nos breuvages!

What do you call a dentist who doesn't like tea?
Denis.
Why do Communists only drink infusions?
Because proper tea is theft. 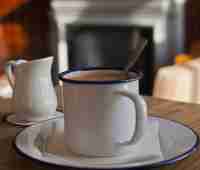 I've been having a fare amount of tea anxiety recently. Me, like George Orwell, I'm a simple chap, and because of the culture in which I was brought up, I like a nice cup of tea [R source] When I was young and full of vim, I made tea by spooning leaves into a mug and brewing the stuff hot and strong. When the restoring cuppa was finished, I'd often spoon out the soggy tea-leaves and eat them too - rrrrroughage!  Now, however . . .
The sixth age shifts
Into the lean and slippered pantaloon,
With spectacles on nose and pouch on side;
His youthful hose, well saved, a world too wide
For his shrunk shank; and his big manly voice,
Turning again toward childish treble, pipes
And whistles in his sound
. . . I make my tea weak. So weak indeed that it is more like making mystical passes with a tea-bag over the cup than actually brewing tea.

I have no time at all for 'infusions' of chamomile, rooibos, ginger&goatsblood, bedtime, woowah-lift, fennel. These are not tea. I am with Wikipedia for the definition: Tea is an aromatic beverage commonly prepared by pouring hot or boiling water over cured leaves of the Camellia sinensis, an evergreen shrub native to Asia. I'd even make a, not really strongly argued, case that these infusions are potentially hazardous because, while tea and coffee have been extensively investigated by biochemists and medical science, we know much less about the chemical contents of random herbs and bushes that you find behind the potting shed.  While I'm moaning about misnamed beverages, I'll have a swipe at almond, soya, oat milk. I'm sorry but these are not milk any more than chamomile is tea. What evolution has developed as a miracle elixir for raising mammal-pups, the food engineer has to imitate with chemistical emulsion. Compare:
Quite apart from the semantic objections, here is a list of reasons why soymilk is dodgy. To ring the changes in an exciting life, on Saturday, at home, if it is going, I'll have medium-large cappuccino. I don't do Starbucks, so I don't know the difference between cappuccino and latte, and I may be getting the latter. This Saturday coffee ritual was a cause of huge amusement to our Polish pal Tadek who stayed with us for two winters 10 years ago: "Hej Bobek, saboda, kawa har har har" then he'd make me keep him company eating chunks of cold pork fat because we were men.

Occasionally, coffee will be off-menu and the current replacement is Macaccino which is a combination of three completely different plant-products:
As you see these ingredients are not a million miles from recognisable food-plants but each will have its own pharmacopoeia and who knows what will happen if the raw ingredients are dried, powdered and mixed with hot water?  Part of the effort to push this beverage out on the market so that some entrepreneur can build a ranch-house with a hot-tub overlooking the Pacific coast, is to present a lot of dubious claims and hype on a web-site. I've been to macaccino.com and been snowed under with data, which I love because data-is-analysis but also presented with dubious claims and assertions Dense superfood nutrition  - boosts immunity - adaptogen energy - healthy fatty acids etc. But there's also a sort of patronizing gloss to the snow-job. Here's Aaron telling how to make a cup of his product. How difficult can it be to spoon powder into a cup and add white emulsion and hot water, that it requires an instructional video? 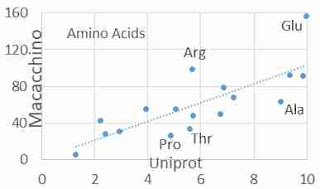 But we haven't time to be drinking hot beverages all morning when there are data to analyse. Aaron has employed some real biochemists to digest the proteins in his cocktail to their component amino acids and reports their concentration in mg/10g powder. This is has the ring of truth because two of the twenty protein-constituent amino acids are missing. The amides Asparagine Asn N and Glutamine Gln Q aren't in the list because when you do a proteolytic digestion you destroy the amide bonds as well as the peptide bonds and convert these amides to their equivalent acid: Aspartic acid Asp D and Glutamic acid Glu E. I give the three-letter and 1-letter abbreviations [prev] in all cases. What's troubling is that Cysteine Cys C is nowhere to be found in Macaccino. That cannot to be true and must be a piece of slack-bob editting. Elsewhere on the site, an infographic of the benefits of particular amino acids appears. Cysteine appears there <whoop whoop internal inconsistency alert>; but Serine Ser S is missing and they've invented a 21st amino acid called maganese. Thinking from those errors and inconsistencies that the whole list of ingredients might be a bill-of-goods,, I compared the relative concentrations to the proportions found in UniProt the database of protein sequences. The graph of that analysis [R], show that the proportions are 'within the normal range' and that Arginine and Glutamic acid are higher in Macaccino than you might expect. As well as being an essential component of all proteins, Glutamic acid, serves us as a neurotransmitter. If the marketeers at Macaccino were scientifically literate <harrumph!> they might seize this information and add it to the miracle-grow benefits of their product.

You will have seen Michael Pollan's advice about food "Eat food; mostly plants, not too much" [multiprev]. Here is The Blob's recommendation for beverages "Keep it simple, stupid".