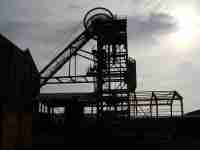 22nd October was the 140th anniversary of The Blantyre Mine Disaster of 1877; Scotland's worst mining accident it terms of body-count N=207. Nobody likes to record the monetary cost in the Guinness Book of Underground Accidents although it often looks like this was all that mattered to the management and proprietors. In May 1878 the Blantyre management William Dixon & Co. Ltd., for example, evicted 34 widows who were awkwardly occupying tied cottages but not longer had husbands working down the pit on account of being killed there the previous year.

We don't do coal any more, or at least we recognise that we shouldn't because burning coal is a terrible thing for the atmosphere and global warming. But in the 18th and 19th and indeed 20th centuries, coal was king driving forward the industrial revolution which made everyone richer and some fabulously wealthy. I've alluded to the story that my Great Aunt Lily lived in retirement in Buddleigh Salterton, Devon. The name of their home, Woolsington, was the same as location of Newcastle Airport because her husband (or maybe 'husband' because it was hard to find a marriage cert) Walter Bell was a descendant of Northumberland coal barons who lived in Woolsington Hall. Lily had that peculiar mix of thrift and extravagance that goes with not having to worry about money.

This is all a bit of a ramble to explain why I'm on about noxious gases today: because 'chokedamp' appeared in the post-mortem on the 1877 Blantyre explosion and I'd never seen the word before. Firedamp, yes: that's methane. *damp apparently comes from the [same root as] the German word Dampf = steam or vapour and there are at least four variations. It's interesting because coal isn't coal but a wide variety of combustible materials of widely different colour, hardness and calorific value. Welsh steam coal was a high quality, hard anthracite [prev] that was exported all over the World from Cardiff docks because it burned clean and hot and was ideal for powering ships.  The Brits set up coal bunkering depots at convenient places round the globe to act as filling stations. Mindelo in Cabo Verde is one example. The local geology - not only the coal measures but the over-burden and under-burden - would dictate the atmospheric conditions down each pit. Miners and managers both would have a vested interest in knowing about the local conditions and acting defensively.

The solution to most *damp probbies was to increase ventilation and many ingenious schemes were invented to a) get fresh(ish) air down to where the workers were and b) pump out the water which inevitably accumulated at the bottom of the workings. In Blantyre and elsewhere they just lit a big fire at the bottom of one shaft to drive an updraft which would suck air /oxygen in down another shaft. Coal at the pithead is cheap and it seems like a rather clever appropriate-tech solution - fans being so expensive and how would you drive them?  The Enquiry exposed the fact that up draft was being serviced from No.2 shaft which was in turn getting its 'air' from No.3 shaft. Along that enormous distance more *damp was percolating into the spaces than was being diluted by the outside fresh air. It just takes one miner to decide it was time to light his pipe, and WHOOOOMPH! That sounds like victim blaming but such data appeared often enough in the reports of explosions.