Multiple sclerosis is an autoimmune disease. Indeed it is the most common such disease of the nervous system and affects more than 2 million people world-wide, killing 20,000 of them each year. It is characterised by failures of the myelin-sheath - the fatty 'insulating' layer of Schwann cells that surrounds each neuron. Schwann cells start attached to one side of the neuron [R for fuzzy diagram - better quality] and then grow so that they curl round and round until each neuron looks like a train of croissants. We have 100 billion of these neurons, 90% of them inside our heads and they do a lot for us: seeing, hearing, feeling pain, writing a blog and going for a walk all require functional neurons and when the myelin gets eaten away, these tasks, sensations and pleasures don't work so good. The dreadful irony is that with MS, as with other autoimmune diseases, the myelin is stripped off by sufferer's own immune system.

Nobody really knows what makes somebody's immune system turn cannibal but I've suggested that, like Guillain-Barré sysndrome, MS is triggered by a virus. This idea is not original to me, but nobody has identified the virus yet. The immune system gets all jazzed up by a novel virus and then won't get back in its kennel when the invasion is cleared up. If something internal looks sufficiently similar to the hopped-up antibodies, then they continue in their destructive work.  Not everyone reacts in this way to the virus, if they did, we'd have 20 million people with MS. As with HCV and those apparently immune to its assault [prevlimonth], we'd like to know what a) what is the virus [if any!] and b) who is most susceptible c) what environmental conditions precipitate the initial attack. IITS - it's the interaction terms, stupid.  As with Zika and Rubella, the virus in and of itself may be trifling in its symptoms; you may not even know that you've taken it on board.

When I ask 'who is susceptible', I'm really asking if there are peculiarities in the genetic make-up or hormonal milieu of folks who start on the rocky road to MS.  Why is it 2x more common in women? why does it have such a late [20 - 50 years] onset? We get exposed to, and get over, dozens of viral insults when we are chuldren. And as with HCV there are many peculiarities and quirks in the pattern of progression: MS is notorious for its remission-relapse cycles, for example. 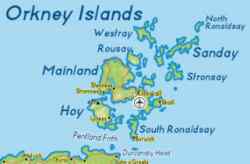 Those 2 million suffering from MS are not distributed evenly across the world and that gives us clues about what the ultimate causes may be. A study in 2012 found that the incidence in the Orkney archipelago was even higher than previously thought going from 200- per 100,000 in 1983 to 400+ per 100,000 30 years later.  That made the headlines because it's the highest incidence ever recorded. The press had a field day trying to reduce the complexities of medicine to something that could be parcelled up in 500 words and tied with a bow. Another red zone for MS incidence is in Nova Scotia which had the highest rate until the 2012 Orcadian results came in. Scotland? Scotia? could there be a genetic thing going down? This is often couched in the fact that Orkney was, for 500 years, a Viking stronghold. Then there is the fact that Orkney is way up there, as regards latitude, which is translated as lack of sunlight and consequent reduced amounts of vitamin-D.  That's pretty estúpido, because in the far North they have 22 hour days in High Summer which is enough to give you hypervitaminosis-D. Yes yes, I know it's different in the Winter but that's point, the natural world is full of ups and downs; it's multi-variate and it is often the interaction terms.

Thus inheriting a particular mutation in a key gene of your immune system, along with red hair and pale skin, from Brunnhilda Thorsdottir, your Nordic ancestor, is only part of the story. Having red hair and freckles is grand, so it is, when you live in Ireland but plays the divil-and-all with your melanoma when you move to Australia. It is likely that a combination of genetic lesions and marginal environment lays you open to assault by the MS virus. When the disease is so rare, it is hard to get a good signal as to the causative factors amidst the noise of normal natural variability. The therapies, such as we have, are quite dreadful: loadsa side-effects, unreliable efficacy, horrendous cost; so we're better off trying to stop folks catching MS in the first place. Bring on the vaccination horses! . . . but first catch your virus.
Posted by BobTheScientist at 06:29