Twice a week, with two different groups of second year sporty young people, I have a two [2] hour classes in Research Methods. This is what we call basic statistics. Last year it was called Quantitative Methods QM, but the content is exactly the same . . . as it has been for 20 years. Two hours is a long time to be fighting with Excel spreadsheets and listening to me rant, so I call a tea&pee break for ten minutes half-way through. Tuesday fortnight a couple of the students had their fluid balance sorted and so stayed in the class room chatting about this and that.  It transpired that two of the class were mitching off college the following day to protest about the transmutation from student grants to student loans. 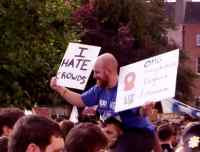 I said that we had done exactly the same thing 40 years ago, to try to extend student grants so that all youngsters had the chance to go to college even if they didn't have a lawyer, strong farmer or business magnate for a parent. My informant last week said that in his school, all the middle class kids were off in Trinity and UCD and the only way he could make his way through college was by working a nearly full-time job in the interstices between sleep and college. We agreed that college should be about what you love and not just a stepping stone to a better [as in more loot] job. For him, as for us in the 1970s, it was a no-brainer that he should lend his weight to helping the dispossessed to secure an education that would make their lives richer and more rewarding in ways that were not limited to money. I was delighted. Back then, the Students Union was run by a bunch of wannabe Trots and a group of activists broke way from the official march and easily out-sprinted the Garda escort to occupy the Department of Education. They sat it out for half a week.  I skeptically use the adjective wannabe because one of the reddest of the revolutionary student leaders soon became a lecturer in DCU. I wished the new generation the best of luck in fomenting a riot the following day

When we were students in the 70s of the last century, everything was possible. You could live in the centre of town for an affordable rent even if it meant sharing a bathroom with other people. Going to college was about finding stuff out - about yourself and other people and politics as much about whatever went down in class. A degree was seen as a qualification in thinking, writing and explaining as well as learning a bunch of stuff about some aspect of the world and its inhabitants. If you didn't fancy college or couldn't afford it, then you could probably get a job on the basis of a reasonable school Leaving Certificate. If times seemed rosy back then it must be me glasses, but we left the country in 1979 and spent the the 80s abroad, along with the whole of our generation: that recession was biting.

When we returned to Ireland there was still the whiff of the free-wheeling, can-do, 'tis grand altogether Dublin that we remembered but the change in the succeeding 25 years has been crippling on the health and happiness of the Irish people - and all the others who have washed up here. One of the most insidious corruptions is that College is no longer an island where you can find yourself, your life-partner and your place in the world. It is a mill for obtaining a monetisable qualification. In the boom-times of the Celtic Tiger courses in quantity-surveying, construction, architecture, law and business were full to brimming because these were seen as an investment; no matter how hateful, boring and badly taught these were seen as a ticket to the merri-go-round. In RsMeths class, I was so happy to hear a student articulating the idea that he was, and by extension everyone should be, in college because he loved sport and wants to get the most out of it. So he was prepared to work [paid and academic] 60 or 80 hours a week to make that happen. This same chap, the previous week had spend a chunk of class time checking out flights to Praha, Barcelona and Warsawa on company time. Why wouldn't you go for a weekend in foreign, he said, it only costs €40 and you can sleep in the train station. With that take on work-life balance, there is hope for the world.
Posted by BobTheScientist at 06:45