If you haven't read Rudyard Kipling's Kim, you may not understand the reference in the title.  You should also, forthwith, go and get a copy out of the library and read it: possibly aloud to your daughters at bed time.  The Great Game occupied the best part of 100 years of feints and bluffs, bravado and bravery, finesse and fiasco in the diplomatic and political shenanigans between Imperial Britain and Tsarist Russia.  India was the prize and Central Asia was the playing-field. 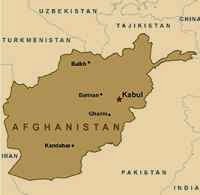 My Geography 301 classes at the Ideal University would ask questions like "why does the map of Afghanistan feature a strange scut tail reaching East to fondle the backside of China?" To answer that you have to go back exactly 121 years to 12th November 1893 and the signing of a pact between a British diplomat called Sir Mortimer Durand and representatives of an Afghan magnate called Amir Abdur Rahman Khan. The two sides met at a village called Parachinar, unrolled a great big map of the region and doodled a line from Persia to China in a roughly SW - NE direction. It was intended to demarcate the respective zones of influence of the two nations. The Afghans weren't really interested in access to the sea, so British India was able to carry its border as far as Persia/Iran. Neither side was particularly interested in the sensibilities or convenience of the Pashtun/Pathan tribes who finished up on both sides of the border and more or less ignored it when they had a blood-feud to follow up or a wedding to attend. This pragmatic solution to minimise disputes and maximise trade has now been set in stone - literally insofar as joint teams went into the outback during the 1890s and set up a series of pillars showing where the Raj ended.  Pakistan reckons that, under the principle of international law uti possidetis iuris, its current border was inherited from the British Empire that preceded the foundation of their country in 1947 - the Durand Line in other words.  The Afghans don't accept this and think the border is elsewhere - presumably deep in Pakistan and liberating all the enslaved Pashtuns on that side of the de facto border.

Afghanistan is divided into 34 administrative districts, smaller round the metropolis of Kabul and larger at the periphery.  In the top right hand corner is the province of Badakhstan [L in red] which includes the misfortunate Wakhan Corridor: a strip of mountains and bleakness making up an edge of the Hindu Kush which is 11,000 sq.km in area but only 15-65 km wide.  About 10,000 people live here squeezed between Pakistan and Tajikistan as their forefathers had been isolated in/as a buffer zone between the British and the Russians. Long long ago it was a corridor in the sense of a trade route into China - Marco Polo is reputed to have come this way.  But for the last 100 years, lack of investment, political inertia and war have meant that the region is a bleak upland backwater with poor infrastructure, low levels of medical care and one of the highest rates of maternal mortality in the World. One of the ironies is that, like Bolivia with its Lithium, Wakhan is sitting in the midst of extraordinary mineral wealth, especially lapis lazuli and other gem stones.  All it needs is someone to bank-roll the exploitation and throw in a few trained midwives. Long form essay in LRB on the consequences of the Durand Line in the region today - mostly ungood.

Posted by BobTheScientist at 02:40