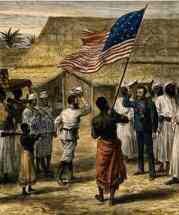 Today marks the 143rd anniversary of the encounter between Scottish missionary explorer David Livingstone and Henry Morton Stanley at Ujiji, what is now Tanzania.  Livingstone was in a rather poor state, "...at his wit's end" in his own words, when one of his African servants came running in to announce that an Englishman was at the gate. The flag that led the visitor's party into the compound suggested that "Englishman" was probably wrong although closer to the truth that you might expect.  Stanley had been born to the name John Rowlands in North Wales in 1841, so he was only 28 when he led the lavishly funded expedition into the interior of the Dark Continent.  The boy's mother abandonned him and he spent some time in the workhouse before emigrating to New Orleans when he was 18. He was sort of adopted by a merchant called Stanley and in respect adopted his benefactor's name.  He had an adventurous (Civil) war serving in the Confederate Army, was captured and served the Union as a soldier and later in the US Navy. A bit like my adventurous grandfather who served in the British Army, the Royal Naval Reserve and the very beginnings of what was to become the Airforce.  Stanley shifted his career into journalism - perhaps recognising his true self. The Livingstone expedition was a newspaper-selling stunt by the New York Herald and Stanley was given a blank cheque to make it happen. He may have used the immortal, understated, phrase "Dr. Livingstone, I presume", or it may be a later massage of memory to make it all sound better.  The flag in the picture is certainly fictional because it has way too many stripes.  In 1818, an Act of the US Congress decreed that the number of stripes should be limited to 13, representing the original 13 colonies, while the number of stars should increase by one, on the 4th of July following the admission of a new state to the Union.  From 1867-1877, following the admission of Nebraska, the number of stars was 37, so there are also way too few stars. tsk!
Stanley's subsequent expeditions in Central Africa frequently degenerated in to escapades in which almost everyone behaved badly, at least by subsequent standards. Stanley's push to trace the path of the Congo was an inspiration for Conrad's very dark Heart of Darkness. 70% of the expedition personnel didn't make it down river and Stanley was the only European to reach what passed for civilisation at Boma. Well 'ard was our Stanley.
Posted by BobTheScientist at 06:57