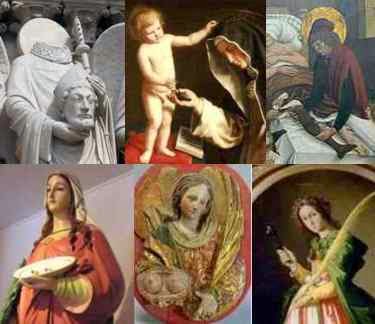 All Saints Day this morning!  We have survived the onslaught of small children dressed as pumpkins shaking us down for candy or folding money.  Before we moan too much and trek off to the ATM, we might pause to reflect on the martyrdom of saints: the inconveniences they had to put up with in order to make it easier for the rest of us to endure the troubles of this mortal life. There is a lot to be said for it.  Knowing that St Dymphna was hunted down by her own father with a view to marriage, for example, might put incest and mental disturbance into a mythological-historical context. My parents, in their later years, devoted a good bit of time to cultural tours round Europe and the Mediterranean.  "We're spending your inheritance!", they'd say. And welcome to it, we responded, inherited wealth being one of the most significant props to an unequal society.  My mother wasn't able to drift through the churches and museums of Italy and Asia Minor letting it all that culture wash over her.  No, she must make sense of it, and became an autodidact of iconography.  She knew a San Roch when she saw a dog licking his knee or a Saint Christopher carrying the whole world on his shoulders. I think she became a bit of a pain for poorly briefed guides as she corrected their spiel. As a quiz for the weekend I've constructed a hexaptych of saints carrying body parts.  You can go off and try to find who they represent.  Knowing that you probably don't have the tenth part of the stamina and dedication of my 94 y.o mother, I'll tell you what each is carrying, and you can match the part to the picture.  You can track down more information on the interweb.  And I quite understand if you are with Rhett "Frankly, Bob, I don't give a damn" on this.