On Darwinday 12th Feb1994, Edvard Munch's iconic painting which he called Der Schrei der Natur, Norwegians call Skrik and we know as The Scream was stolen from Oslo's Nasjonalgalleriet and held for $1million ransom.  This was an offer that the Gallery felt it was well able to refuse.  It was left to stew for a few months until a sting operation involving Norwegian Police, the Specialist Crime unit SC10 of the London Metropolitan Police and The Getty Museum recovered the painting on this day 7th May 20 years ago.  The Perps were convicted but released on appeal because the British agents had entered Norway on false passports.  Which seems irrelevant to the guilt or innocence of the alleged thieves.  But here's a puzzle: which Scream was paintnapped in 1994?  Because there are four (4) versions:

The answer is #1 on the left.  But the others have been stolen as well: #3 the 1910 version was most recently lifted from the Oslo Munch-Museet in August 2004. Several hoods were convicted of the crime although the painting was still missing at the time of the trial.  A large reward was offered by the City of Oslo and the painting was recovered in mysterious circumstabces and fairly good nick in August 2006 after 2 years on the run. I don't pretend to know what the painting means. Munch wrote a poem on the frame of #2 which gave his version: 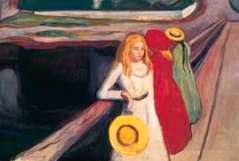 Munch is really only known for one four paintings although his other stuff is less obviously troubled. Last time one was sold it clocked a record amount of money, but he created a whole oeuvre of  other material. I like this example of his eighteen runs at abstracting the fundamental truth of Girls on Jetty. I've written before about relentlessly hunting down the essence of something that is nagging at the soul of an artist. I know absolutely nothing about Art (I don't even know what I like) but this reminds me of the colours of Edward Hopper the American realist who was 20 years Munch's junior.  I suspect that there's rather a lot to like as well as much to disturb about the works of Munch: I must check out google-images.

Because so many of my readers are scientists and quite possibly alienated by all this high-falutin' Arts Block stuff, I wrap up this post with Gary "The Scientist's Cartoonist" Larson's (The Whine from his Weiner Dog Art collection) tribute: 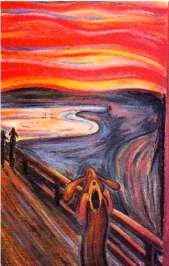 Posted by BobTheScientist at 06:44