A light on the darkness

Elizabeth Mary Cochran was born 150 years ago today on 5th May 1864 near Pittsburg, PA, and she was going places where the rest of the girls from her street were not.  Here father was a classic self-made can-do American industrialist who foolishly died intestate (don't do this at home, adults) when Elizabeth was six. It was a hard life for women in a Victorian world where they were effectively chattel-slaves and had few opportunities for independent income. Her mother accordingly re-married as a way of supporting her extensive brood of children but chose to wed a yob. During the divorce proceedings young Elizabeth asserted, in the articulate and sassy way that was to become her signature, that “My stepfather has been generally drunk since he married my mother.” Her family moved into Pittsburg where they ran a boarding house and Elizabeth added a "sophisticated" final e to her surname.

When told by a "What Girls Are Good For" column in the Pittsburg Dispatch, that her role was to cook and clean and raise the children, she wrote an angry, articulate, anonymous ("Little Orphan Girl") rebuttal denouncing the assumptions.  This caught the attention of the newspaper's editor George Madden who hunted her out and asked her to write more of that stuff.  After a one-column trial she was hired at $5 a week using the pen-name Nellie Bly.  When she went to Mexico as a foreign correspondent, instead of writing about the tiaras at diplomatic balls, she chose to expose the endemic and divisive corruption of the country and suppression of the press; which led to her being expelled from the country. Six Months in Mexico (1888). Back in Pittsburg she did some undercover reporting, slaving in a cardboard-box factory with other working women and exposing what it was really like to work in a sweat-shop. It was probably not a great deal different from the places where your dirt-cheap shirtings and grossly overpriced running shoes are assembled today in Indonesia and Bangladesh. She got a little too hot to handle and was re-assigned to “stories about flower shows and fashion” until, at the age of 23, she jacked it in and went to New York for more exciting prospects. 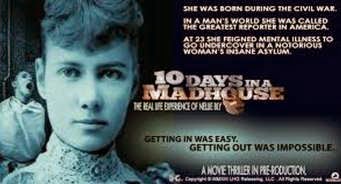 Within a year she was hired by Joseph "Prize" Pulitzer to write for the The New York World. Her first, and now notorious, assignment was to fake her way into Blackwell’s Island Insane Asylum (they hadn't invented euphemisms yet!).  She wrote about the casual cruelty that was meted out on the unfortunates in that institution: thumps, rats, cold baths, crap food, force-feeding. Ten Days in a Madhouse (1887). The film of the book is coming out this year. At least the deranged of New York didn't have to work washing sheets as was required more recently in our own Irish Magdalen Laundries.  After that she got herself thrown into jail to see what happened to women when caught up in the US criminal justice system.  Those were just the most dramatic of her exposés; the daily grind was writing about the corruption and malfeasance of NYC officialdom that was only quantitatively different from what she'd seen in Mexico.

The stunt for which she achieved lasting fame was attempting to emulate Jules Verne's Around the World in Eighty Days. She set sail from New York on 14th November 1889 and returned 72.25 days later having used a variety of transport (balloon, horse, mule, railway, rickshaw, sampan, steamship) to achieve the circumnavigation. Her telegraphed reports were great for the circulation of her newspaper. All good fun, but nevertheless not a walk in the park. Around the World in 72 Days (1890).  However well she wrote, her book titles could be more exciting, no?  At the same time, the New York Cosmopolitan staked another young journalist Elizabeth Bisland to go round the World the other way.  Bisland took four days longer and so in the Harry Potter winner-takes-all style that is universal in our society is consigned to the dustbin of the forgotten. 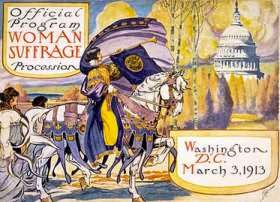 Nellie covered the infamous Woman Suffrage Parade of 1913 down Pennsylvania Avenue DC the day before Woodrow Wilson's presidential inauguration.  The women were roundly duffed up by a crowd of heckling and jeering men aided and abetted by the police when it came to putting the boot in. 200 women finished up getting treated in hospital for their injuries.  Nellie's story was headlined "Suffragists are Men's Superiors" and she predicted correctly that women wouldn't get the vote until 1920. Senate hearings in the aftermath resulted in . . . the replacement of the police chief.  It being 100 years ago, black suffragettes were compelled to have a separate parade somewhere else.

Nellie married a very wealthy industrialist 40 years her senior and chaired the company Iron Clad Manufacturing Co. after his death.  She was certainly not a place-holder in the board-room and took out patents for a steel drum, a novel milk-churn and stacking garbage-cans.  Her 55 gallon steel oil drum eventually became the global standard.  So I'm claiming her as a woman in STEM.