Euradvice from a trusted source IV (see I , see II, see III)
Last post before the European Elections.  I'm sorry that my huge following in Ukraine (привіт вам обом) is not enfranchised in the Elections for MEP that start tomorrow.  They are loyal to a fault in the East and would happily follow me into the very jaws of Strasbourg.  But I can offer voters in the South constituency of Ireland my considered opinion and advice on this the day before Der Tag,  As a trained researcher, I endeavour to find things out, so that you don't have to. There are 15 candidates for 4 seats, which sounds like excellent odds: better than winning the Lotto and about the same as winning a door prize at the AGM of our Credit Union. Except that an election is not a lottery because the names are not pulled out of the hat at random.  Jings!, if they were I'd put my name up for a 4/15 chance of raking in a salary of €84,000 and all those air-miles between DUB and BRU.

These 15 people represent 8 political parties - and 4 Independents. Some of the political 'parties' are so small that the candidate might as well be Independent for all the infrastructural back-up they are going to get from their 'party'.  Take Fís Nua for example, a splinter group of the Greens - the name means New Vision, but is not to be confused with (anglophone) New Vision which loose coalition inched Luke "Ming' Flanagan over the line in the 2011 General Election.  I'm a tree-hugger and my natural constituency is The Greens: I've been out helping them put up posters for the last ten years.  I haven't joined the party however because, in their Irish incarnation, they come across as anti-Europe, anti-Science and West of Centre on the whoowah spectrum. So maybe Fís Nua with its green roots is worth an X?  They fielded a candidate in 2011 called Ben Nutty and another of their chaps, Peadar Ó Ceallaigh, polled the lowest number of 1st preference votes of any candidate ever.  People who follow opinion polls (also known as sheep Ovis aries) have been telling us all Spring that a vote for Labour is a wasted vote as their support is leaking, not to say haemorrhaging away.  Ditto Fís Nua, folks.

Another 'party' in the South constituency is the Catholic Democrats aka Theresa Heaney from Cork. CD was oncebthe Christian Democrats - presumably they ditched all the Methodist, 7th Day Adventist, Church of Ireland and Presbyterian reactionaries to launch the newer slimmer Catholic-only Democrats.  Before CD.II and CD.I they called themselves the National Party, presumably to encourage images of National Socialists and the British National Party duffing up sinners (<irony>jews and homosexuals, same thing</irony>).  Her flyer says "Save the married family - it is our future": nope, sorry, it is the Past, our family has been unmarried for 40 years and we know far too many other exceptions for Heaney's statement to be true. Heaney is fighting for the right of women to work in the kitchens of homes where there are two parents of opposite sex. That's the positive, otherwise the party is predictably negative: anti-abortion, anti-divorce, anti-children's rights, anti-change, oh yes, and anti-Europe.  Your call.

The other party you may not have heard of is Direct Democracy Ireland (DDI).  As the National Sodality of the True Cross is looking backwards through rose-tinted glasses to a dancing at the cross-roads idyll in The Past, so DDI are looking forward to an untried and untested New.  DDI has strong positions on fluoride, vaccination and whoowah medicine.  They seem to have links with the right-wing anarchist ungroup called Freemen on the Land who only obey the laws that suit them.  Freemen can be interesting and articulate and add a leaven to the daily grind for the local papers.  Freeman Bobby "Ancient-Y-Chromosome" Sludds doesn't believe in motor insurance but does drive his car about County Wexford and gets booked for doing so.  DDI chair Jan van de Ven is running for MEP in the South: he doesn't believe in electing representatives because modern technology should enable us to decide on all political and social issues by polling the people directly on each issue.  Does he look a bit like a stage hypnotist? 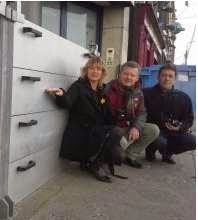 But enough already - here's my #1.  Grace O'Sullivan from Tramore Co Waterford.  She's running as a Green but after their disastrous drubbing at the last general election that ushered in the current wholly reactive Anything But Fianna Fáil government, there are Greens but the Green Party is in ragged tatters.  O'Sullivan looks well fit and well-preserved on her posters. The Beloved met her in the Farmer's Market a couple of weekends ago and said she looked less well (possibly shagged out with the campaign mill) in the flesh. But that's okay, at least she made an effort on the poster-front to look her best because she's canny enough to know that many (most?) people in Ireland vote on such specious information as "I knew his mammy", "he was a great hurler in his day", "his eyes are too close together", "what a tie!". As an expert in telling a deft lie with a photograph, we see her here demonstrating how tall the flood defenses in Wexford need to be if we are to cope with global warming: taller than either herself, or Trevor Sargeant or Cllr Danny Forde.  But we can see that you're not standing up! ye daft green loons.  O'Sullivan has done stuff for her community (lifeguard, lifeboat crew), for herself (surfing champ) and for the planet (Rainbow Warrior) which is a lot more than the fat middle-aged men in suits and/or the daft monomaniacs (pylons, potholes, protestants) against whom she is running.
Posted by BobTheScientist at 05:37