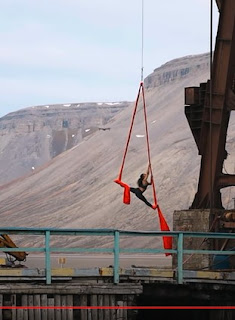 Uma - jointly captained by Kika and Dan [prev] - sailed into Longyearbyen earlier this year and then they sailed 80km across the sound in their personal dorm-mobile to Пирами́да Pyramiden the Russian coal mining centre which shut up shop in 1998 when extraction of coal became uneconomic and/or the Russians felt they no longer needed / could afford their presence in the area.

Pyramiden is Episode 284 in Dan & Kika's world-ranging voyage in a little hi-tech yacht which the bought cheap and fitted out themselves after they met in Architecture School in Canada and then decided they didn't want to design workaday hospitals and apartments while they still had fire in their bellies and two pairs of knees to transport themselves when they arrive in port. It's an internet thing, like Leo Sampson's Tally Ho project, whereby couch-spuds like me sit on the sofa and watch creatives doing there thing Out There. A thousand coal-miners and dependents / managers / ancillaries used to work in the area before King Coal played out. When the company pulled out they left heaps of extracted but unexported coal locally and 20+ years later this is still being used to keep the lights on in the diminishing collection of buildings that haven't fallen into ruin or been filled up by landslides. Tour-ships come to visit and allow the top-dollar punters one hour in town to tick their bucket lists and boast to their neighbours when they return to Peoria or Osaka.

Dan and Kika get to hang around in midnight-daylight after all the visitors have buggered off back to Longyearbyen: having a couple of beers at $7 a bottle. Which is not insanely expensive compared to Oslo. Uma groupies will know the Kika does Aerial Silk acrobatics for fun and that why they had drone footage [R] of aetherial against a post-industrial backdrop against a polar desert backdrop.