It's Science Week from Sunday 07 to Sunday 14 Nov 2021. This national festival of STEM has been formally funded in the 2nd week of November for the last tuthree years.  2020 -- 2019 -- 2018 -- 2017. Wexford Science Café has been there, trying to boost our numbers and spread the Joys of STEM. I unloaded the responsibility of convening the WxScCaff this year and so all I have to do is rock up.

There is a bit of money sloshing about to support Science week down in the provinces and this year it was enough to commission a film by local Film Company Crannog Media. We cast about for a couple of handfuls of science-folk who'd go in front of the camera and decided that the topic would be

"What have you changed your mind about?" 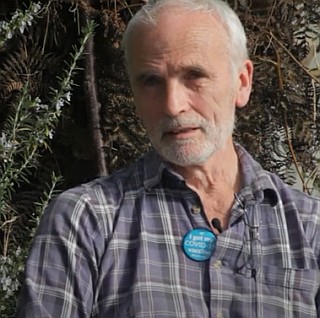 or Has any evidence cut across your bows since SARS-CoV2 started pirating about the planet which made you stop and think: I might have been wrong about that. I'd already written about my contribution to this show-and-tell so I had my script already written when Chris and Alan, with Lydon as Best Boy and Key Grip, wired me up and made me talk to camera. I carefully set the backdrop to feature a huge sheaf of bracken Pteridium aquilinum and the scythe used to cut it; but tat was lost in the zoom. They pulled on 9 other lapels whose owners could translate STEM into Yola and edited all that material down to a sharp 20 minutes of mind altering substance. No, no, not Psilocybin this time!

At the Cafésession last night, we watched the film and then opened the floor to discussion. A couple of people remarked that very few of the contributions actually described an evidence-based change of mind since Feb 2020. Whoa! lads. I've had three good ideas during 45 years of science which might be equivalent to a seismic shift in my thought patterns. So the chances that one of these events will have occurred in the last 20 months is zero to the nearest whole number. But it's hard to shake lose the idea that scientists are no more prone to having creative insights than poets or chartered accountants . . . and we do cherish our hypotheses rather than really go at them with the 🪓hatchet of skepticism. Always, always treasure your exceptions with Wm Bateson.