History is bunk . . . because it's written by the victors, or at least the survivors.  Irving Finkel MultBlobPrev, the eccentric face of the British Museum, acquired a boxful of old diaries many years ago because it was too distressing to see them committed to a dumpster.  Journal-keeping was not part of his culture growing up and perhaps his fascination with The Other - he speaks fluent Assyrian cuneiform - made him start reading. Finkel is a bit of a card with an understated sense of humor; reads supposed diary:
Mon: Got up, went to work, der dee der
Tue: Couldn't be bothered to cook anything; had a cold sandwich
Wed: Went out in the garden
Thu: Saw God . . . 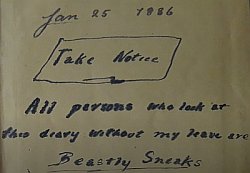 His thesis is that, diaries are a special window on [subjective] truth because private. This privacy is an important plank in the save-the-diary platform - old diaries often have a lockable clasp or magical injunctions [R] on the outside or are written in code - the juicy bits anyway. Old diaries are a once-secret window into the ordinary lives of ordinary people for the time they were written. Not the same thing at all at all as the political diaries which get published in a lucrative deal when a government minister is caught with his fingers in the till and has to resign. Those diaries are self-conscious from the outset and are writing history in way that discards truth in favour of a deceptively glowing account of being in the right. Such a diary is seen as part of the perp's pension pot. 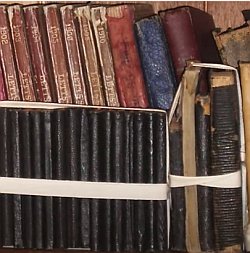 Me, all through my schooldays, I kept a diary . . . for an average of 15 days each January. Because someone would give chaps like me a Lett's Schoolboy Diary [not dissimilar to the red volumes L from 60 years earlier] or a fountain-pen, or both, for Christmas. But I lacked the stamina - or indeed the interest - in recording the boring round of normal life: failing to do my music practice; inadequately preparing for Latin translation class; having my head flushed down the t'ilet by somebody bigger than me.

Finkel and fellow diary-geek Polly North established a permanent collection of discarded diaries in London in 2009 called The Great Diary Project. They will last a lot longer than the record of my daily life recorded as e-mails through the 1990s: indeed that archive has already gone forever. And the GDP is still actively soliciting new/old material: they'll take anything diary-like because they have sufficient humility to refuse the task of gate-keeping: Who knows what will seem important to researchers in 200 years time?

Here's a youtube comment to one of the above-cited videos: I am thrilled to have discovered the Great Diary Project as a home for a very special diary.  This covers the period 1810 to 1839 mostly in Somers Town, London, but also a trip to France and later to Yorkshire.  I now live in Oregon, USA, and have mailed the diary to where it will be appreciated.