Do they take sugar? 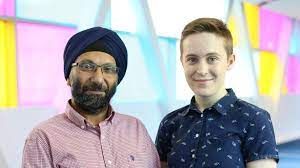 Inappropriate Questions is an interesting CBC podcast. It's run by Harv and Elena [L] and gets a bit edgy.

Where are you from? jingles a few bells. Because the cliché question when two Irishers meet on an airport layover is "Where are your people buried?" According to the podcast their are certain First Nations where a genealogy is essential for correct and appropriate treatment by others. Less so in Ireland but it won't be long for those two travellers to find a cousin or a college friend in common. Clearly the issue resonates with the status and integration of New Irish.  [transcript].

I get that question a lot because my accent [RP / Middle-class Southern Brit] doesn't match the shit-covered bib overalls standing in a lane in the Irish Midlands. One of the few occasions when me-the-Patriarchy is back-footed. It doesn't usually provoke a knee-jerk, and later regretted, "go back where you came from", though. I remember pausing on the Camino to chat to a young chap. He asked where I came from and I said "Ireland" because that's where I'd left my books and family. His companion, a Nordie, harrumphed and turned away with "Don't sound Irish" which was just a teeny bit pots and kettles.

Another episode interviewed Christine Hà, whom I last saw on the way to becoming Masterchef in 2012 - when The Blob wasn't even a twinkle. Hà is an expert, not only in cheffery, but also in being blind and her IQ question was "is it okay to ask blind people if they need help?". It is clearly only going to start the conversation if you only ask one person for their experience, so they spoke to Dr. Mahadeo Sukhai, blind from birth and also Director of Research at the Canadian National Institute of the Blind. Dr Sukhai has a chirpy sense of humour but ex officio he also has data. The CNIB's position is that being put in the position of having to ask strangers for help is a poor second best to designing, equipment, products and systems so that they are fit for purpose - for wheelchair users, vision impaired . . . and any others towards the end of whatever bell-curve of 'normal' is in the works. In any society with a finite budget, this must be an aspirational position because governments are, in their nature, utilitarian: trying to spend the least possible amount to ensure re-election.

Appropriate Question: How can we help you in your work / in this situation? Do you need help? is too binary Y/N 1/0.

There are transcripts even if the index is a bit ragged. [via MeFi, where commentary, examples]