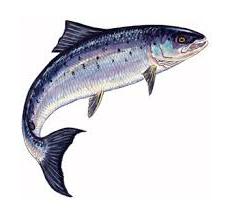 Like a lot of people, I like a bit of salmon: fresh, smoked, tinned, en croute, in chowder. But I would survive if I never got to eat another morsel. Salmon is served at weddings or as stamp-sized canapés and has the whiff of de lox luxe. Back in the day, salmon was so abundant that indentures for London apprenticeships would limit the amount of salmon the poor young chaps would be obliged to eat in the Summer.  The transition from feast to famine is explored in Salmon: A Fish, the Earth, and the History of Their Common Fate by Mark Kurlansky - my latest audiobook.

A large part of my post-graduate education was the formal study of ecology: the complex tangle of interactions and inter-dependencies in the living world. We talk about food-webs nowadays rather than one-dimensional food chains because, on occasion, top predators are partial to a locust or two, or even a bit of grass. But Kurlansky indicates how little I know about what makes the world pulse or what causes one species to drift off-stage . . . forever. By extension, to the nearest whole number, even professional ecologists know <nothing> about the role played by a given species; let alone what other species impact on its life.

Take logging. Forests served a vital role in the life-cycle of salmon:

When the trees are felled out and sent down stream:

Tree-huggers, like you and me might have an unthinking affection for clean blue hydro-power. So does FAANG, they site their server-farms right next door. Once you start using electricity it's hard to cry hold enough. More demand requires more damn dams. For more than 100 years, planning permission for new dams has been contingent on allowing migrating fish to by-pass the obstruction. Part of the budget accordingly went towards incorporating fish-ladders but neither the power-company nor the industries and services there-dependent, in their rapacious souls, gave two toot-toots about salmon. Fish & Wildlife Services, let alone distant [first-nations] fisher-folk had a very small voice and short pockets compared to Big Power.

I could go on [and on]. I could fill in the details. But this map review is not the territory. Ya have to read this book, even if you're not a piscatarian. It's not fun but we really need to reset our base-lines. In Ireland Salmon is Salmo salar [the salmon that leaps] but there's many more species in the Family: broadly Salmo in the Atlantic, Onchorhyncus in the Pacific. Here's a list, not least because the common names are so evocative of A River Runs Through it.

In the Atlantic, it's way more complex with 50-60 recognised Salmo species mostly trout: Salmon salar, of which we feast, and Salmo trutta with brown trout, lake trout and sea trout as sub-species. All delicious, all at risk.
Prev: Green corrie - anadromous - Bradán an Eolais - Ecocide - Russianside - Smoked - Lox -
Posted by BobTheScientist at 07:14