Sorry to disappoint if the title suggested an insight into the virtues of my very expensive education. I first went to [this] school in 1959: I was hit, with a stick, by an adult at the various schools I attended up until I got the vote and left school in the same Summer. But the tide was going out for such assaults in my part of the education system in England, so it really didn't happen much. YMMV [James O'Brien's did] , and I'm sorry / outraged about that.

Today's post today is about cutting ferns / bracken Pteridium aquilinum on our hill [above]. It was my task a month ago to map out the territory to be cut in 2021. The 20 acre = 8 hectare treatment section had been draw with a ruler on a satellite map by an ecologist who'd spent precisely 3 half-days on our hill in his life. Our ecologist is a personable fit young bloke, competent at his mètier, but his knowledge of our hill is strategic rather than tactical. The 200m x 400m rectangle included a) dense forests of head-high ferns [dark-green above] b) rough pasture where grass, gorse, heather and fraocháns are at least holding their own against the invasive [brown / spackled above] c) blank bouldery scree where neither sheep, nor folk, nor ferns can cop a reliable toe-hold [grey above].  That photo was taken from the valley on Tuesday afternoon after The Lads had been cut, cut, cuttin' along on Saturday and Monday. I was amazed at how clear was the evidence of clearing that I stopped on my way back from a trip to town and took the picture. I appreciate that it will be much less clear to you, dear reader, WTF I'm talking about, so zoooom:

Any fule can see the trees to the left of the scene. The line to their right (green below, not green above) marks the mountain wall which separates the commonage from privately owned fields. What thrilled me was the straight green line running parallel to and above the mountain boundary: both clearly the work of human hands. Begodde, I done that! With a bit of help from the neighbours, d'ac. 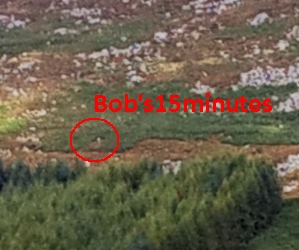 But having been the boots on the ground as well as the photographer, I can add some detail to this broad-brush.  My scythe is the tool of choice for thrashin' fields of bracken, especially if the ground is even and not too steep. It is, contrariwise, a liability if the footing is uncertain and/or the target is sparse and rocks abound. Under those circumstances a sickle, a deftly handled bill-hook, or even shears are better. Our gaffer, accordingly, sent me off a bit from the main party to scythe away all Bobby-no-pals. In contrast to a slasher or bill, scythes are definitely right-handed, they don't have a reverse gear but cut from right to left. Ideally, this leaves a windrow on the leftside of the scyther. The process only works if you start on the left edge of the field and work right in rows, so that the spoil falls away from the working face. Just before knocking off on Monday, I noted a white rock further up the hill and elected to cut a bight / bite out of the fern-forest to delineate a couple of separate squares for The Lads to work on the next labour-day. I actually laid down 2x 2m windrows before the works whistle blew and we all trudged home for tea and medals scones. Very satisfying to see the result of concentrated work. Pity the task will never be repeated here; because fern-thrashing works . . . but only if it is persistently executed for several consecutive years and in late June.
Posted by BobTheScientist at 10:05