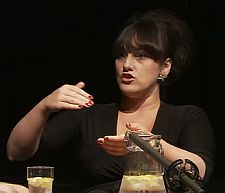 Just finished listening to Grace Dent's [that's her R, talking about twitter 10 years ago] autobiographical memoir Hungry on Borrowbox. I'd never 'eard of 'er because it's years since I bought a copy of the Guardian [Aisling Bea alert!]; and I stopped watching Masterchef when Dau.II left home. Indeed we haven't owned a television since 1985, so TV celebs are quite the closed book for me. I was alerted to Dent's book and her existence by Dau.II [it's her foodiness's bday today] who has become a Guardianista since becoming Chef in her own kitchen.
Dent was born in 1973 and grew up on the working class side of the tracks in Carlisle. None of the adults in her life had any aspirations or expectations for her beyond getting a catering/cleaning job at the motorway service station and getting pissed at the weekends.  Young Grace had other ideas because a) she had dreams b) she could write and against all the odds scraped into Stirling University. There she started to write both on campus and sending stuff the national magazines.

Against the odds and with quite frightening Chutzpah, Dent blagged her way onto the paid staff at Marie Claire; and used that a stepping stone to other journalist gigs. She became a name among the London chatterati because she had he finger on the pulse of whaaat's happenin' in the capital. Through persistence, brass and learning she got her foot in the door at events where the glitterati would also turn up if they needed a free glass of Moët and a fistful of canapes. Suddenly her phone was ringing. An editor needed someone to fly to an event in Vienna this weekend and, because Dent was seen everywhere, her number was called. Megacorp would pay for a 1st Class flight and a council-flat-sized suite in the Centraal Hotel. She is currently restaurant critic for the Guardian where she can be scathing, funny and insightful but turns . . . or indeed all at once. Dau.II rates her writing along with Felicity "Croissant" Cloak's.

Back to the book! Chez Dent in the 1980s was the heart of Thatcher's Britain. What's not to like about being given the freehold on your council house? When the shopping heart of Carlisle was ripped out by building a massive Asda supermarket on the ring-road, the Dents became Asda's best customers. Especially last thing before closing when processed carbs and saturated animal fatsBlack Forest Gateau was reduced to almost dumpster prices. The whole family wandered down the aisles amazed and delirah at the cardboard-clad bargains. There's a telling moment when Mrs Dent comes home with bags of cheap groceries and berates her husband for not eating his way through the cornucopia of last week's browsings: there is no shelf space for this week's! Mr Dent develops diabetes from his heroic efforts to support Cadbury's share-holders.

Later on the poor chap slips into w{o|a}ndering dementia and the family do their utmost to keep him in his own home until his medical and physical requirements become too much entirely. Grace leaves her London flat to moulder and quixotically rents a bungalow for herself and her parents near her brother's gaff in Cumbria. She can't drive, so logistics are difficult, not to mention the wearing, draining, exhausting business of care. Did I mention that Mrs Dent is in and out of hospital with cancer?

What I love about Grace Dent is that, even after embracing the nonsense world of black & white truffles aux penguin jus, she still likes the comfort food of working-class North Britain: deep-fried pizza, chips with everything, HP sauce. Check out her chat cheese and pineapple porcupine with Yotam Ottolenghi [min 3.15] Her silver-spoon London pals have never tried deep-fried frozen pizza - they really haven't lived!