Is the mouse a good model?

A few years ago I was embarrassed to admit that I'd never heard of the 4th biggest city in China. [Ans: Tianjin 天津市 - it is near Beijing in the NE of the People's  Republic]. The 3rd biggest city in PRC, after Shanghai and Beijing is Chongqing 重庆市. Now I had heard of Chungking because it was the Capital in Exile in WWII after the Japanese sacked Nanking and occupied Beijing and much of the N of the country. Note the last character 市 is the same for both cities: it means city! Our ignorance of China is immense: the population of Chongqing alone exceeds that of the island of Ireland: could we take the trouble to find out more?

That opportunity was provided last week at the end of a 3 week Summer Programme at The Institute for students of Southwest University (SWU 西南大学) in Chongqing. I was 'volunteered' for 6 contact hours to play some computational-biology games.  They paid me, but not enough to create a whole new course, so I modified part of a comparative immunology module I developed a few years ago. The question I put to the students was

"Is the mouse a good model organism for developing
a novel therapeutic against such-a-disease".

One pharmaceutical research avenue which has been fruitful is the development of monoclonal antibodies specific for key molecules in immunological / inflammatrory response pathways. Monoclonal antibodies MABs are amazingly specific in seeking out rogue actors which get over-excited in  a particular disease. What I know about normal human physiology, after teaching it for 7 years, is that the whole system is a set of checks and balances; disease is when this delicate, multiply redundant, complex of interactions goes AWOL. MABs are given dork-dopey names , mostly ending in -mab so that Google-savvy patients don't be bothering their doctors to try the latest me-too drug they read about in Hello magazine.

The standard protocol for a new drug prospect is to build on our increasing knowldge about the molecular fundamentals of a disease and ask . . . if we could put a damper on MAPK then it wouldn't be able to gee-up STAT3 and the whole over-heated system would cool off. MegaPharm is only interested in drugs that will make them a load of money, but they have to ensure that a) they do indeed work in the way intended and b) they are safe to use: that their side-effects are not too damaging. The usual thing is to try out the prototype drugs on a couple of hundred lab mice Mus musculus, and then do some statistics to see whether the idea might be a runner.  If none of the mice get the screaming abdabs [technical term] and enough of them get better, then it's time for the first human trial.

In 2014, I wrote about the most famous case where that next step went horribly wrong with a test of TGN1412 which seemed in mice to counteract the effects of CD28. It was a salutary reminder that mice and men are similar, yes, but also different. Nobody died in that first human trial but several of the human guinea-pigs were badly roughed over and won't ever properly recover.

That gave me the bones of a hypothesis to test with the boys and girls from Chongqing. Let them compare a list of drug targets to see how similar those molecules were in Mus musculus and Homo sapiens. TGN1412 was to be a treatment for Rheumatoid Arthritis. My correspondent G who is pain-wracked by RA has been taken off Infliximab because her condition is no longer responsive to having her TNFα tricked about; so she would welcome a novel therapy to help her get out of bed in the morning. But TGN1412 and multiple organ failure is a bridge too far even for her.

The kids from Chongqing were invited to choose one molecule from a list that had been used as a target for a named monoclonal antibody. Starting with Infliximab and ending with TGN1412: 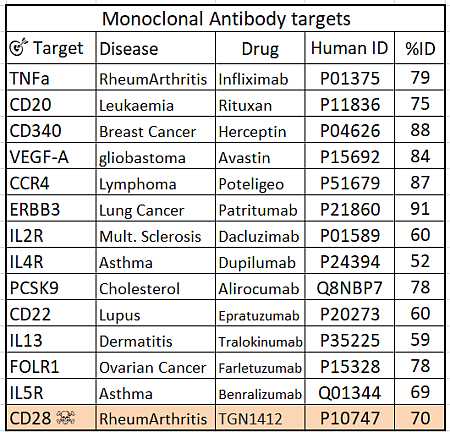 They were then requested-and-required to use the Blast server at NCBI to find the homologous [equivalent] gene in mouse and see just how similar they were. I show above the target-list and, in the last column, the answer for the class. The specific hypothesis under test was that CD28, the TGN1412 target, would be noticably more different mouse-vs-human. And the answer is . . . No!  I emphasised that nothing like this analysis had ever been carried out before since science began in the 17thC: the kids from Chongqing were pushing the Frontier of Science.
Here's some more detail on IL13 one of the crappier comparisons. At 59% identical, you might think that IL13 is missing in mouse and P20109 is something else entirely. But a reciprocal best hit analysis shows that the two sequences are indeed orthologous and probably have the same structure and function in both species.
IL13 Mouse P20109 Query vs Human P35225 Sbjct
Expect 2e-40 Identities 76/130(59%) Positives 93/130(71%) Gaps 8/130(6%)
Query  6  TAVLALACLGGLAAPGPVPRSVSLPLTLKELIEELSNITQDQ-TPLCNGSMVWSVDLAAG 64
T V+AL CLGG A+PGPVP S +L    +ELIEEL NITQ+Q  PLCNGSMVWS++L AG
Sbjct  20 TTVIALTCLGGFASPGPVPPSTAL----RELIEELVNITQNQKAPLCNGSMVWSINLTAG 75

Query 122 TKQLFRHGPF 131
K+LFR G F
Sbjct 136 LKKLFREGRF 145
The fundamental problem is more complex than 22 undergraduates from China can solve in 90 minutes; but we probably knew that. I still think it's an empowering exercise.
Posted by BobTheScientist at 07:13