I do not know what I may appear to the world, but to myself
I seem to have been only like a boy playing on the seashore,
and diverting myself in now and then finding a smoother pebble
or a prettier shell than ordinary, whilst the great ocean of truth
lay all undiscovered before me.
Isaac Newton
Suggested background music.
Sing it, Isaac! All those years of expensive education left me knowing a lot . . . which has been useful in winning table quizzes. But like Newton, I realise that for every fact I know, there are a thousand that are known to other people; and a million that are unknown unknowns. The Blob has been good to me because, in the twilight of a career in science, I have an excuse for learning new / more / other. Actually, looking with bemusement and interest at things I wrote about in 2014, I suspect my mind is at a steady state: every new fact displaces an existing one. Right now, for example, I know quite a lot about Inonotus obliquus but can't for the life of me remember where I put the box of 'best' cutlery. 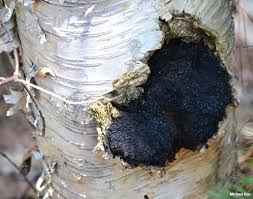 Inonotus obliquus? That would be чага = chaga. Which you will have certainly seen of you've spent any time at all being observant in a birch Betula spp. forest in Poland [włóknouszek ukośny] Norway [kreftkjuke], Russia [чага], Finland [pakurikääpä], Sweden [sprängticka] or Netherlands [berkenweerschijnzwam]. All those common names suggest that local people have been paying attention to this fungus; indeed many of them have been infusing and consuming it for hundreds of years. The black mass which you can see [R] blurfing out of the bark of a silver beech Betula pendula is a sterile mycelial mass. Aficionados dig out this clinker, chop it up, soak it, then add warm 50°C water and let it steep for two days in a cool place. Too warm and you'll get a kombucha-like ferment. Instant gratification people will chop it up and pour boiling water on it.  They can't both be right. As I explained patiently five years ago tea, coffee and maté require different infusion temperatures to release their active principles. It is clearly best if you canoe to a remote spot in Sweden, start a fire by striking a flint with your bowie knife, and climb a mountain before coming back to your chaga tea.

Paul Stamets points out that the reproductive future of this fungus depends on its mycelia penetrating the heart of the tree until they kill it or it gets blown over in a storm. It is only from the dead horizontal tree that the fungus is induced to send up its fruiting body and release spores to continue another generation of  Inonotus obliquus. He is keen that people will leave the conks alone because it has gotten to be A Thing among New Age Alternative types for the supposed health benefits of the infusion. There are parts of Alaska - esp. near cities and towns - where the species is locally threatened because of the rapacious greed of woo-wah harvesters.

You need to hold back a little in your consumption of chaga tea because it is a really rich source of oxalic acid. Oxalic acid is toxic because it is avid for calcium. Calcium oxalate precipitates out of the plasma and accumulates in the kidneys eventually blocking up the plumbing. Dau.I was really avid for wood sorrel Oxalis acetosella as a child. We used to caution her about eating too much - the name is no coincidence: oxalic acid was first isolated from Oxalis . I used to believe that rhubarb leaves were super toxic because they had a much higher concentration of oxalic acid than the stalks. Wrong! spinach, swiss chard, parsley, chives and chaga are all far richer sources of oxalic acid.
Posted by BobTheScientist at 07:36