I was recently beating my breast " yew . . 'orrible . . ignorant . . little  . . man" because of  the tiny amount  I knew about Chinese geography. As one person in every six is Chinese, it might be a good idea to beef up our knowledge about that part of the World? Last week, I had a moderate amount of amusement [see 1st link] with 22 youngsters from Southwest University (SWU 西南大学) in Chongqing . . . I have the t-shirt to prove it. We used to call it Chongqing. At the end of their Summer Course, which has cost someone a king's ransom x22, we took them out to dinner at the place where they play traditional Irish music in the evenings. In case conversation flagged, I brought along an outline map of the PRC to see how well the kids knew the internal geography of their country. There's a bit of a meme on youtube and about people from, like, Miami FL who cannot point to Florida on an outline map of the USA. let alone countries where them comm-mune-iss live. Irish know-nothings exist too.

Well I didn't use the map for that purpose because a much better idea presented itself. I asked the young chap, who was scoffing sirloin beside me, why he chose Chongqing, of all the places in the world, for college . . . and where did he come from? His explanation was hard to follow, so I whipped out the map and asked him to put a dot for his home place. The young woman opposite (from Yunnan right on the border with Vietnam) did likewise and then I sent the map round the table for data. This came back: 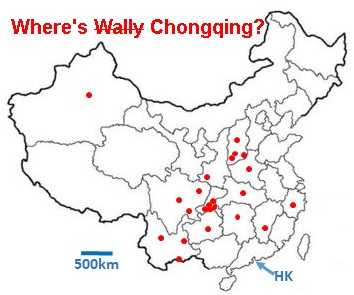 The rules of Central Tendency suggest that the cluster of red dots more or less in the centre of the scatter is the most likely location of the Alma Mater and that turned out to be true. Chongqing City is in the middle of one of 4 "Municipalities" (the others are Beijing, Tianjin and Shanghai) which has an area equal (within 2%) of the island of Ireland; but with 30+million people on board: about 5x more than Ireland N+S. That sounds stuffed but the population density is about the same as Belgium's and much less than England's, so there must be plenty of green space, farms, and parks. Knowing where your students come from can be useful in designing recruitment drives.

The Chongqing 22 came with one of their professors who launched into the map to explain which provinces were where. She was spectacularly wrong in pretty much every attempt: locating Tibet where Xinjiang is and mixing Hainan and Formosa/Taiwan the two largest off-shore islands claimed by the PRC. While we're down South, I've indicated where Hong Kong HK is located at the mouth of the Pearl River. My asserted that the city of Canton was just up river from Hong Kong and Macau was met with incredulity. But I was right, although everyone calls it Guangzhou 广州 nowadays. The province of which Guangzhou is the capital is Guangdong [Canton geddit?] and they speak Cantonese. Cantonese vs Mandarin is about the same as German vs English or Spanish vs Portuguese. The amazing thing is that they write with the same characters, so the characters are pronounced differently but read the same. That has been a major unifying force in the region, even when the area presently called PRC was a patchwork of warlorderies and corrupt governments.

And the fact that Chongqing, clearly one of the smaller territorial divisions of the Republic is the same size as Ireland gives you some sense of just how Big China is. The scale-bar on the map should help also. It's about 2x bigger than the whole EU, and about the same as the USA.
Posted by BobTheScientist at 06:45