Dau.II, my youngest, is a quite peculiar young woman. We had 48 hours staying at her flat hanging over the south bank of the River Lee in Cork. For entertainment we went twice to the English Market to pick-and-choose from a dazzling, fattening array of delicious breads, cheeses, salamis and pastries. Then we went on an exploratory visit to the Nano Nagle Centre and its small-but-perfectly-formed gardens. We had one spare evening at home and she settled us all on the sofa to view The Barkley Marathons: the race that eats its young. [IMDB 90 minutes; it's on Netflix]. Herself and myself are the only people I know who treat long-distance running as a spectator sport. There isn't much to see after all: the standard athletic track is 400m round, so a 10,000m race requires 25 circuits which gets quite boring.  For marathons, without TV or a drone, you get to see the front runners for a couple of minutes and then as much of the tortured peleton as you have patience or cruelty for.  I've written numerous Blobs I - Luz Long - Andrew Lloyd - IIII - Zatopek - Pollock - etc. on the triumph of the will: where athletes strive against some inner standard of excellence to do the very personal best they can: to give it bloody socks.

Bloody socks is the least of it with the Barkley 100, which I indicated in a Sunday Supplement in 2015 as a 20 minute documentary of the process and its history. On dit que [well, Bismarck actually] despite their utility you don't want to see either sausages or politics in their making. Seeing grown men and women in voluntary extremity is not a pretty sight either. When Dau.II suggested watching The Barkley Marathons, that 2015 link was the reason I thought I might have seen the film before. I hadn't, but I did know the back-story . . .

In 1972, James Earl Ray, the hard chaw who assassinated Martin Luther King in 1968, escaped from Tennesssee's maxiumum security Brushy Mountain State Penitentiary. There was a massive hue-and-cry man-hunt with blood-hounds and helicopters to re-capture Ray and his fellow perps escapees. When Ray was apprehended (exhausted, dehydrated and hungry) from under a pile of fallen leaves 58 hours later he was a mere 13 km from the perimeter of The Brushy. "These hoods think they're tough" thought long-distance runner Gary "Lazarus Lake" Cantrell, "I could do at least 100 miles [160km] in that time". And so the quirky Trials of Hercules Barkley Marathons was born.  The Full Monty consists of five (5!) circuits round a nominal 20 mile = 30+km fell running course. 'Nominal' because the course changes slightly each year and is probably accreting rather than trimming miles. Call it 5 consecutive marathons.  You have to complete it in 60 hours (it's not a stroll in the park or a Santiago pilgrimage). As we sat there watching the start of the film, Dau.II did the maths: "but that's less than 3km/hr" [with the implication I could walk faster than that] . . . as the thought became words, the gods of film cogently cut to a shot of a handful of competitors toiling up a steeper-than-1:1 slope. Can you walk up that so fast? sprang from the screen. All told the 100 mile route requires 16,500m of vertical climb (and down again because the start is the finish). Mt Everest is half that at 8,850m . . . from sea level, not Base Camp at 5,400m - ya wussies. 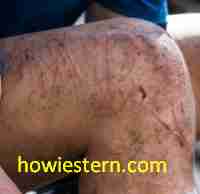 60 hours requires consecutive marathons because the schedule is tight - there is no time for a recovering snooze between circuits: barely time to dress the wounds, change the socks and stoke up on calories. And let's not forget the 'rat bites' [R = part of John Kelly's crop from 2017]: horrible, unavoidable thorn damage from a section of the route called The Rat's Mouth. Last time I ran further than for a bus, I couldn't even manage two consecutive circuits of the 400m track without stopping for a breather.

The extraordinary aspect of these Ultra events is that, although there are rules and although there is a winner [or many years when everybody loses] it's not really about competition with others; it's much more a challenge to the runner's own sense of what s/he can do. It's about taking part, meeting people who are on the same wave-length, doing the best you can . . . and then a little bit more. I guess, to use an old fashioned word, it is about being brave.

The race has been run since 1986, the first person to complete the course didn't emerge until 1995. Since then only 15 people have achieved this distinction. As only 40 people are allowed to register for each event, that's a success rate of less than 2%.  In the film, based on the 2012 run, three men completed the course, John Fegyveresi in 59: 41:21 with just 19 minutes to spare. This Spring there was a near miss by Gary Robbins, who came in 6 seconds over time but also, groggy with sleep deprivation, from the wrong direction following a navigational error.  It is a measure of the man, the event and the sense of camaraderie that his response was “Thank-you very much for another wonderful event,” Robbins said.

The title makes a reference to a biblical parable about how the widow's tiny contribution to the Temple's collection was more valuable than a fat cheque written by a rich man. Likewise the Barkley, for some people failing to complete a single circuit is seen as a triumph of the inner resources of the mind over the hellish matter out in the unforgiving woods. Everyone pushes their own envelope uphill!
Posted by BobTheScientist at 08:05