Y'all have taken H for Harvey on board because that is the hurricane/ tropical storm which is currently stalled over Houston, Texas and giving them a shocking wet hose-down. We in Ireland have been more intimately involved with G for Gert, the tail end of which 2017 hurricane delivered 80cm of rain to NW Ireland last week.  But there is a whole alphabet of hell in the immediate and medium term future for Houston - USA's 4th largest urban area. 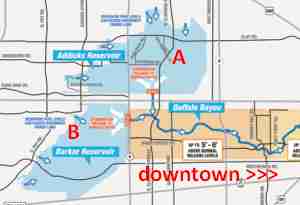 That alphabet starts with A for Addicks and B for Barker, as indicated on the map. They are two roller-compacted earth dams - you may call them levees - established 70 years ago West of Houston as flood-control /recreation reservoirs. In the centre of the picture, two red rectangles show the location of through-dam concrete-lined spillways. Economists have intimated that by damping the boom-and-bust of normal precipitation and run-off, these structures have saved the city of Houston about $16 million each year in flood damage claims. Thanks to this reservoir system, a steady flow of water travels right through the centre of downtown Houston in a river called the Buffalo Bayou.  It has become a lung for the city [as in Cork] with parks and cycle-ways for office workers to take lunch-breaks in or cycle to work along. Add an indeterminate morale and productivity value that wouldn't exist if the Bayou flooded several times a year. The issues are explained with his customary clarity by Oroville's Own Juan Browne.  In 2009, it was revealed that the concrete spillways were being eaten away by waterwolf in the same way as caused the catastrophic under-cutting of the Oroville spillway. They think they have fixed it with an expanding polymer solution: let's see if that fixin' works when the water starts to roar through the structure - cavitation anyone?

The whole of SE Texas is pretty much flat. Lake Oroville, in N California, which had it's own watery dramas [bloboprev I - II - III] in the Spring was made by blocking off a natural valley in the foot-hills of the Sierra Nevada. Addicks and Barker had no such natural basin and are essentially prairie surrounded by their dams. Addick's earthworks are 19km in extent and would contain a quarter billion tonnes of water if brimful. Barker has a similar capacity within a slightly longer 22km berm. Neither reservoir has ever been close to topping out . . . until this week. At 2am local time on Monday 28/Aug the Army Corps of Engineers opened the floodgates to discharge water into the Buffalo Bayou. Since the complex was built, suburban Houston has spread out to and beyond the two lakes and hundreds of homes are being condemned to a dousing pro bono publico. If this is not done, then Houston and its people are looking at "a 30 foot [9m] wall of water" as the rising water over-tops and destroys the levees like the dykes in any medieval flood you care to name - Nieuwekerk - St. Marcellus - Zuiderzee.  Earth dams, even if roller-compacted, are no defense against running water. Lego - in the woods - on the beach - in the lab.

Tropical storms are damaging because of the wind, but also because they suck water out of the Gulf of Mexico and dump it as warm rain inland. They typically move over, through and off somewhere else and this limits the amount of precipitation to manageable proportions. Stalled by anti-cyclones over the Rockies and Great Plains, Harvey keeps on giving in buckets. A metre of rain has already fallen and at least another 300mm is likely before the end of August. 1300mm of rain in one place will flood all the local low lying areas, even if the height difference is a few metres.  Because the topography in Houston is so flat, water cannot drain away quickly which allows people to walk waist deep through it pushing a canoe full of pensioners without worrying about being swept away.  In mountainous N Italy in 1963, a 'mere' 50 million tonnes of water killed 2,000 people because it was travelling downhill fast and all at once.  If your local news starts mentioning Addicks & Barker in the context of Harvey anticipate a significant rise in water levels and more homeless people and trashed possessions. STOP PRESS: late bulletins last night on RTE were mentioning Houston dams, albeit not by name.

The currently dominant political thinking in the USA, UK and Ireland is that we-the-people don't like big government - if we're working we'd rather pay minimal taxes and stand on our own feet surrounded by our own much desired, and ultimately unfulfilling, stuff. And if we're not working  - because we're old, young, sick, unskilled, under-educated - we don't pay any tax aNNyway. But we love having toll-free trunk roads, free schools for our kids, functional hospitals if we need them. A lot of the infrastructure for these comms, educational, health and security expectations were put in by more public-spirited ancestors . . . and we're not even willing to pay for their upkeep & maintenance. The aging infrastructure maintenance requirement is HUGE and largely unaddressed [e.g. Eisenhower's interstate highways]. Small government also means insufficient inspection and regulation [who needs a lot of idle bureaucrats?] so we get houses built on crap foundations, with dodgy wiring and no fire-stopping between units. I'll mention building on flood-plains tomorrow.
Posted by BobTheScientist at 07:17