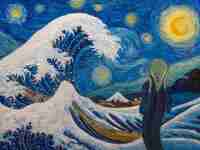 I've spent my whole life trying to get an education: if you start off on that journey, I guess it never finishes. Like for my home-educated daughters, the coverage is patchy: stronger on women in science or islands than on dinosaurs or dragoons.  My father was a painter with a better eye for landscape than for the human figure but I was/am utter crap at painting anything more intricate than a fence. Part of this is because I live in my head and draw how things must be rather than how they actually look: my buckets have flat bottoms and circular tops. I know nothing of art but I know what I like:  Dial M for Mondriaan - Matisse - Munch - I'm only here because I googled Hokusai parody and got the meld of Hokusai, Munch and van Gogh [R]. The Great Wave off Kanagawa part of the collage is perhaps the only work by Hokusai which is widely recognised in The West. I had it as a poster on my wall when I was a student but my eye was so superficial that I didn't twig that one of the waves was Mt. Fuji.

I'm on a Hokusai jag today because last week I had a hot date with The Beloved at the Chester Beatty Library in Dublin Castle, where there is an exhibition The Art of Friendship Japanese Surimono Prints until the end of August. Hokusai features extensively in the prints on display but I find I prefer the [more accessible] hand of his contemporary/teacher Totoya Hokkei. Early 19thC Japan, like early 19thC Ireland, was a grossly unequal society and the highly educated idle rich exchanged New Year gifts with each other; often as illustrations counter-poised with poetry. Your status was commensurate with the fame of the artist and poet you could commission. I show [L] an example Dancer with hand puppet of horse CBL J 2234  from the exhibition catalog. The reproduction quality is lousy but if you look at the blown up inset, just above the two white lines of the bridle you can see the characters for 二 2 四 4 七 7 九 9 十 10 and 十二 12 below the symbol 大 [large]. This was essential information for organising you tea-parties, ikebana and visits to your favorite geisha during the coming year because it told you which of the lunar months were set for 30 days [大] and which for 29. With everyone being super sophisticated you wouldn't want your servants to be privy to this information as they tidied up your papers.  It was as if Tom Cruise commissioned a short-print-run graphic novel for Christmas with pics by Alan Moore and text by Neil Gaiman.  This is terribly appealing to the puzzlist in me: I don't know any artists or poets so I'll have to generate something really obscure myself for next year's New Year cards.

I'll share with you another piece of clever clogsery in CBL J 2169 The dry-shallows shell = minasegai [pic]  a print by Katsushika Hokusai and poems by Tsuru Hinako and Yomo Utagaki Mugao, one of which goes

mimachi kara
nagusami katera
sebumi shite
kasumi no umi ni
hitohi asoban
waiting for the snake / to beguile the time / I wade the shallows / of the sea of mist / and enjoy the day.  The reddened first syllables of each line form an acrostic for the name of the illustrated shell mi-na-se-gai.

Hokusai is quoted as saying something inspiring for those too old to win the Fields medal: "I became an artist, and from fifty on began producing works that won some reputation, but nothing I did before the age of seventy was worthy of attention. At seventy-three, I began to grasp the structures of birds and beasts, insects and fish, and of the way plants grow. If I go on trying, I will surely understand them still better by the time I am eighty-six, so that by ninety I will have penetrated to their essential nature." I am firmly of the opinion that old chaps like me should retire early to make room for the younger generation. But when I articulate this, people say "Oh no, your experience is such an valuable asset". True, dat and Hokusai seems to say that, for things which matter, only experience can generate true depth of sensibility. But our ould-fella experience and, well, wisdom, is valuable but not invaluable; new ideas matter too.
Posted by BobTheScientist at 07:57