A lung for the city

Like sheep Ovis aries people want life simple: enough food, sex at the appropriate time, a change of clothes for the Summer and reasonable health in the feet and internal organs. Because thinking is hard, we prefer our opinions also to be simply formulated and articulated. When an independent Ireland was born in 1922, the [Catholic] Church and its officers were given extraordinary respect. Article 44.1.2 of the 1937 Constitution held that "The State recognises the special position of the Holy Catholic Apostolic and Roman Church as the guardian of the Faith professed by the great majority of the citizens."  That was comprehensively ditched [85% for removal] by the Fifth Amendment referendum of 1972. More or less at the same time came the church child abuse revelations; first as a trickle and then as a flood and from being paragons the Religious were deemed to be all Black Hats. That hostility blew up again a few months ago when the new National Maternity Hospital was to be paid for by the tax-payer but owned by the Sisters of Charity (the few that are still above ground). The commentariat grudgingly praised the Sisters for being 'tough negotiators'. Ditto issues are spread throughout the education sector where the state pays the salaries and the maintenance but the parish priest is normally on the board of governors and the church owns the school. Demonizing the catholic church and all who sail in her is unfair and unproductive.

Sisters of the Presentation of the Blessed Virgin Mary aka The Pres were founded in Cork by Nano Nagle in 1775 primarily to educate the children of the community. The order grew and prospered and sent colonisers all over the World so that there are Pres schools from Arizona to Zambia. The original foundation not so much, the Victorian buildings on the edge of downtown Cork just across the River Lee were no longer in the heart of a residential district and the school closed its doors in 2006. There was a heritage preservation order on the sites and its buildings and so demolition and development was impossible; and the steeply sloping site didn't help matters. The Sisters decided to re-purpose their home as Nano Nagle Place to house the offices of various educational charities but also to make rooms available for local "community groups, charities and local businesses".  That deals with the school buildings - users will pay for access which will put some cash in the coffers to replace slates on the roofs. The old chapel has become a heritage centre giving tribs to Ms Nagle and her crew. The rest of the site is being retained as gardens which are available to the public as A lung for the City.

A similar thing has been achieved by giving over part of the corridors of power in the Dublin Castle complex to the Chester Beatty Library which we visited earlier in the Summer for Hokusai. Incorporated in that site is a roof garden which we ear-marked as the ideal place to have a picnic lunch during our day in The Smoke. Before I'd taken a second bite of my sandwich a fonctionnaire rushed out of the stairwell to tell us the eating and drinking are streng verboten in the garden: his job apparently is to monitor such transgressions on CCTV. There was no signage to indicate the forbidden nature of our undertaking; indeed we'd checked and been told that it would be okay by a volunteer at the Welcome Desk. The most regrettable effect of the sorry interlude was the thought that the charming and accommodating volunteer was in for some Stalinist re-education in the basement. 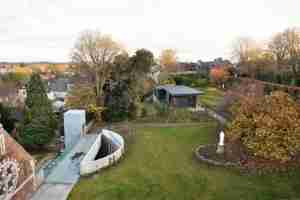 Not So Nano! It was too early for lunch when Dau.II took us to visit the Nano Nagle Centre a few days ago but I asked the lady at the desk if the garden was also a Lunch for the City. Indeed it was, she replied, the gardens were an open space freely available to the public. She often noticed that people brought their sandwiches and coffee cups through the reception area and never left the remains as litter. Hmmmm, the gardens are free, yes, but you have to go through the reception / gift-shop (and up some formidable steps) to get to them. We were forcibly greeted and welcomed by a relentlessly sunny woman who came out from behind the desk to check-us-out as she checked-us-in. I daresay any wannabe litterers are in fear of some re-education down in the basement.

Verdict: an asset for a crowded city centre . . . more benches needed. The awkward sloping site has been made wheel-chair accessible with handy three-level elevator and smooth paths with reasonable gradients but the several arbours are currently without a place to sit and pause.
Posted by BobTheScientist at 07:24