Lithium does yer head in

I've written a lot about lithium on The Blob because I've spent the last 4 years supervising a research project at The Institute which set out to measure the concentration of Lithium in the groundwater of Co Carlow and in some plants which take up water (and lithium??) from the soil through which that groundwater flows. The results have been published, not as crisply as I might have wanted. The running sore in the results is that lithium is present in our groundwater at concentrations that bumble along at the threshold of detectabilty with our instruments. If you live beside a brine lake in Bolivia or sink your bore-hole through a reef of spodumene you may get higher levels of lithium in your tea.

Here's a recent headline "High Levels Of Lithium In Tap Water May Cut Risk Of Dementia" from IFLScience. It's interesting because the study [original in JAMA] is a) massive: 70,000+ cases and 700,000+ controls b) hypothesis driven.  The hypothesis being that lithium carbonate has been used to treat bipolar and other psychiatric conditions for nearly 70 years and, therefore, features in the WHO list of Essential Medicines.  It's hard for Mega pharm to make much money on lithium as a product because you can literally dig it out of the ground: it costs about $0.10/day in the third world and 10x that in The West.  If it is efficacious as a psychiatric medicine maybe the risks of dementia are lower in areas where lithium is delivered naturally to the kitchen tap?  Here's the data [I've trimmed out the sample sizes and median concentrations so that the table fits across my narrow page]: 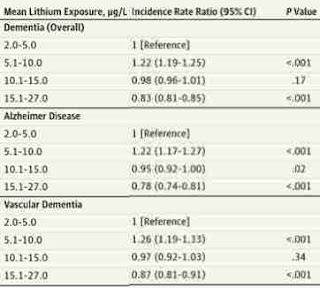 Three sorts of dementia have been characterised, both generally and in this study, and the extraordinary feature of the data is the identical pattern of effect in the three parallel 'troubles'. It is an epidemiological study which attacks the data arseways: in a normal case/control study you'd have your patients and give them different doses of lithium; here they have different doses of lithium and ask if the rates of dementia track that.

All reported differences are related back to a cohort of people who live in an area of very low [<5 ppb] lithium in the water. If you double that threshold to 5-10ppb it looks like you are more likely to be demented. The difference is small but, because the sample size is enormous, it is statistically significant. If you crank up the level again to 10-15ppb, the effect disappears and then it comes back, in spades, in the opposite direct for the highest level >15ppb of lithium in the water.  This disconcertingly swoopy pattern is captured (without clear error bars) in the diagram [R].