Something for the weekend. 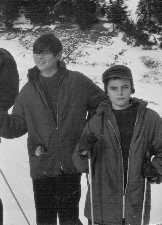 When I was teenager, I went a tuthree times on skiing holidays in the Alps. I was pretty good; I didn't fall over much and I didn't break things when I did; I knew I was going to live for ever so I wasn't frightened; I went downhill fast and was able to cut a few dramatic turns. [The evidence: self R, R looking serious with The Brother R, L looking hatless ca. 1967] The  weather in the Alps is continental, so even in January or February it can be cloudlessly sunny for days on end, so you need sunscreen if you're skiing in shirtsleeves. All good fun: I should have done more while I was still fit for it.  Then again, The Boy took a tumble snow-boarding a couple of years ago, when he was still well fit for it, and lost the use of his arm for several anxious days and spent months in physio to get back to normal. He put out his arm to break the fall and tore the ligaments and strreettcched the nerves in his shoulder. Then again then again, his cousin, my neffie, who could ski like a pro, fractured a few vertebrae in a ski accident a year ago and is lucky to be still walking [gingerly].

OTOH, I couldn't see the attraction of surfing.  With skiing you wait for a go on the slopes in a sunny mountain-top cafe drinking cappucino and eating a delicate Austrian pastry. With surfing you wait for a go bobbing up and down getting cold and your croissant gets all soggy.  But The Boy likes doing both - although actually he's a snowboarder rather than a skier. The first date he had with His Beloved he dragged her off to North Devon in a borrowed car. As the surfboard occupied the whole nearside of the car, she had to converse with the back of his head. I guess the attraction is not simply physical. When he was over in Ireland in August he put the 3 y.o G.Dau on a board to catch a small wave or two! An occupational hazard with surfing is that you can drive for miles to a surfable coast and find that the wind is up but the surf is down and you bob about getting cold for the whole weekend without ever catching a wave.

Can't have that! There is a long history of generating reliable man-made waves in a situation that is really close to coffee and buns.  The most recent venture to open in these islands is Surf Snowdonia in Dolgarrog on a former aluminium plant. It's ironically on the site of a devastating wave that destroyed a large part of the village and killed 16 people in 1907.  Industrial plants accumulate all sorts of chemicals, from diesel spills to heavy metals and 400 tons of toxic material was scraped off the site and had to be trucked away. 40,000 tons of hardcore from the demolished buildings was kept for foundations.

The diagram (from the BBC) shows the fundamentals of the technology.  The pool is 300m long with a central trackway running for 150m. The track drags a snow-plough back and forth and up and down all day shoving water in front of itself.  The bottom of the pool is contoured to generate left- and right-breaking waves of different heights which endure for about 15 seconds.  That's pretty good compared to the length of ride you'll get under optimum conditions out at sea. And the wave is quite precise, reducing the variables means that you can perfect your technique, so that you are ready for real surfing in the wild. Costs between £19-£25/hr, which is a lot steeper than the cinema, so you'd better get something out of it. Propaganda video. Looks bloody dangerous to me, the wave is travelling at 36 km/hr about 5m from a row of steel pillars. I don't see anyone wearing a hard hat: concussion in 3m of water is likely to be fatal. I hope they serve bara brith and/or welsh-cakes in the cafe; that would make it all worthwhile.
Posted by BobTheScientist at 07:52