A bucket of cold water

Headline in the WaPo via 3quarksdaily

Why some scientists are worried about a surprisingly
cold ‘blob’ in the North Atlantic Ocean
accompanied by this chilling picture of global temperature variation for the first 8 months of 2015: 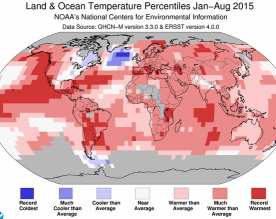 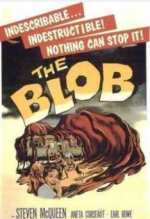 The dark red squares are those regions of the World which have, Jan-Aug 2015, experienced record hot weather - California has been burning all Summer and has run out of water to douse the flames. The Pacific (the pool in which Californians bathe) has also been hotter than ever before (well, at least since coherent records began in 1880). That will have an effect on El Niño as I wrote back in May.  The climate scientists have taken to calling this Pacific hot-stirring The Blob - with a conscious hat-tip to a really scary 1950s sci-fi horror movie. . . not the actual movie starring Steve[n] McQueen (the 1958 FX were quite ropey) but the idea of the film: "indescribable / indestructible / nothing can stop it".  Because that Blob was on the other side of the World, I was quite blasé, not to say flippant about the whole story.

The dark blue Blob in the North Atlantic shown on the map above is another kettle of fish entirely. It's much closer to home and it will certain-surely impact on Ireland and the Western seaboard of Europe this winter. What?  According to the boffins from the National Oceanic and Atmospheric Administration NOAA the Blue Blob indicates a severe disruption of another acronym: AMOC [Atlantic meridional overturning circulation].  What usually happens used to happen is that cold dense high-salt Arctic water surges down the Davis Strait between Baffin Island and Greenland and plunges to the depths of the ocean. The 'vacuum' is filled by the North Atlantic Drift aka The Gulf Stream which has been simmering away in the sub-tropical shallows of the Gulf of Mexico and the Sargasso Sea and this starts/continues the relentless clockwise stirring of the North Atlantic surface water. Trillions of tons of water washing up against the shores of Europe has enormous beneficial effect on our climate. A little warm water can heat up a helluva lot of superjacent [never had to use that word before!] air.  That's why we have mild damp Winters (and mild damp Summers as well) and no typhoons, hurricanes, blizzards, dust-storms or plagues of locusts.  The climate is so ambient that you don't really need an overcoat in Ireland - a good Aran sweater will answer for most outdoor occasions. What's happening now is that the overall global warmth has melted billions of tons of ice off Greenland and this cold light fresh water hasn't been sinking. The Gulf Stream is going to have a fight to get here at all and when it arrives it will be kitten-weak and no match for a chilly blast from Steppes of Mother Russia.

Be afraid, very afraid . . . and get a lot of baked beans into the bunker.
Posted by BobTheScientist at 16:33