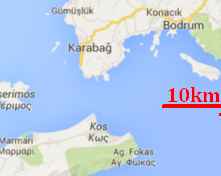 If you live in Europe, it won't have escaped your notice that there is a tsunami of people washing up on the European shore in such places as Kos Κως a Greek Island 6km from the Turkish coast near Bodrum (formerly Ἀλικαρνασσός).  That seems like the easiest place of access to the EU, you could push your family across the water on an old tractor inner tube.  At the other end of Turkey there is a shared border with Syria, so it's really just a long 1200km bus ride: sure beats being banged up in a shipping container. Samos, a little further North, is only 1.5km off the Turkish coast but not serviced so well on the Turkish side. Thousands have arrived in Greece in this way in 2015.
The L.É. [Long Éireannach = Irish ship] Niamh and L.É. Eithne have spent the Summer cruising about in the Med between Sicily and Libya picking people out of the drink and from vessels of all sizes, shapes and states of seaworthiness.  Their combined tally so far this Summer is 6000. I guess the refugees are so happy to be rescued that they don't mind being patted down by a sailor in a haz-mat suit. One of these fine days, a baby is going to be born aboard the L.É. Niamh and become thereby an Irish citizen. The Irish Naval Service delivers their loads to Sicily and goes back out for more. When the total of incoming refugees topped 40,000 earlier in the year, the Irish government agreed to take 600 = 1.5% of the total which is 50% above pro-rata based on population.  I perked up when it came to numbers so I thought it was time to find out how dense the people of Europe are packed and how rich they are.
So the EU is the most populous, USA the richest and Russia the largest. Why put out these particular statistics? Because they have been bandied about as criteria to determine a 'fair distribution' of the refugee tide among the countries of the EU. We can't leave them all in camps in Kos or Sicily when we have two unused outhouses on our farm which are dry and warm. However possible it may seem (until you actually have to do it) to launch into the Mediterranean or wait in line for rations at the height of Summer, it will be immeasurably grimmer this Winter. 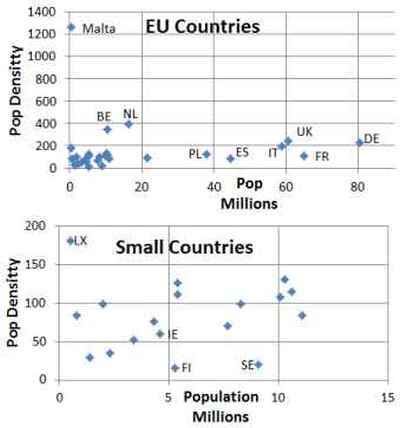 Okay so let's start with raw population and population density for each of the 28 countries that make up the EU (including Croatia which joined in 2013 news to me).  The Union is dominated by Germany France UK and Italy which are large, populous and rich.  Spain and Poland form a second tier in population and all the others range from small to tiny.  There are 20m Romanians but their economy is piffling, so they aren't in a position to take many extra bodies.  I have zoomed in [L below] on the small sparsely populated countries that are crammed into the bottom left of the top graph.  This shows that Malta is out of the running for housing large numbers refugees in any long term view: her 400,000 people are already stuffed into an area 1/3rd the size of County Dublin. A similar argument could be made of BeNeLux which are all much more densely populated than the EU average.  On the other hand Sweden [SE] and Finland [FI] are very large countries with comparatively small populations. So on the population density argument we should load trains full of Afghanis and Syrians (and Kurds too) and send them North. Which should make any sensible person realise that population density is not a useful criterion.  I used to teach in Turku and Helisnki in the Winter and it was cold outside. Sending Afghan children to the perpetual dark of Oulu or Kajaani is just a recipe for misery and frostbite. 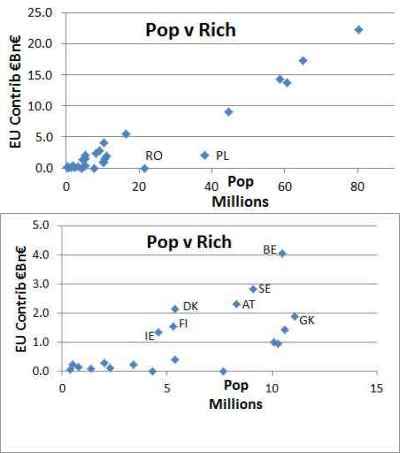 Let us now move on to the Rich List to see if any EU countries are punching above their weight for wealth and in need of indentured servants from among the dispossessed. I've used the amount each country contributes to the EU commonwealth as a surrogate for GDP and it looks like wealth tracks population rather well - there is a correlation coefficient of 0.84 - but the two medium large countries Romania and Poland are economic basket-cases, so they cannot be expected to process excessive numbers.  As above, I've zoomed in [L below] to the bottom left-hand corner to separate out the less populous / less rich countries. This shows that there is a clatter of small poor countries which I haven't troubled to individualise - places like Slovenia, Slovakia and the Baltic States.  Who I have fingered are Belgium, Austria, Denmark and Ireland - and Finland and Sweden again - as places which are making a bigger contribution to EU Central than the average. They should be able to afford to make space for some refugees. Our Minister of Justice Frances Fitzgerald announced yesterday that, as the official number of migrants was now 150,000, Ireland would take 3x the previous number or about 1800 refugees.  Again it's 50% higher than a strict population-based quota, as you'd expect from a richer country. But Minister, the smart money says that as many as 1 million refugees will be landing in EU this year, that's 1 extra for every 500 of us, so we should find places for 9000.

We just wouldn't notice them if they spread out and make like not-a-crowd.  When we came back to Ireland in 1990, there were 3.5 million people (almost all white, monoglot and catholic) in the Republic, there are now 4.5 million people present-and-correct.  At one stage Ireland had 200,000 Poles contributing to the economy - getting up early, staying late and doing the sort of work that Irish school leavers disdained. I didn't notice Ireland's shirt-buttons pop off as these extra people cosied up next to the warm bosom of Cathleen ni Houlihan. That's because they were not extra weight, they were rather the wings that helped the Old Girl to fly. A few years ago I was crammed up the front of a Dublin bus and fell to talking to the driver.  Turned out he had been an Engineer back home on Uganda but was making better money and had steadier work driving a bus in Ireland. You may bet that the people who have the ooomph to leave Hell-hole Province in War-istan and can raise $2000/head to pay their trafficker are not going to hang around waiting for hand-outs for long. They'll be net contributors long before you learn how to pronounce their names correctly. Another, plenty-of-room argument can be made from the fact that over the same time Ireland was adding 1 million people to its roll-call, the Baltic states together shed 1.8 million citizens.  Estonia, Latvia and Lithuania are among the tiny countries of the EU and they must have housing in a proportion of the rooms vacated by their nineties+noughties emigrants.

And what about Mother Russia?  Is there a debate going on in Petersburg and Moscow about taking in thousands of the emigrating Afghanis?  They have done their share of de-stabilising the internal affairs of that country: after the Brits and before the Americans.
Posted by BobTheScientist at 06:09