The flag of New Zealand has been in the news last month because of an expensive competition to ditch the old stars of the Southern Cross with the [UK] union flag in the canton and replace it with something hipper and less colonial.  Having so many novel designs [many of which rehash a limited list of symbols] will only make it less likely that the flag will change. Possession is 9/10th of the national symbols. 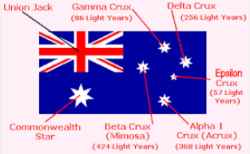 Today, it's National Flag Day across the ocean in Australia. It commemorates the decision to adopt almost the current flag on 3rd September 1901. The annotation [L] explains that the rogue seven-pointed star under the Union Flag is the Commonwealth Star.  It originally had only 6 points to represent the 6 states then making up the Federation: W.Oz, S.Oz, NSW, Victoria, Tasmania and Queensland.  Not included as a point: Northern Territory (Darwin, Alice Springs, Uluru and a helluva a lot of desert but only 240,000 people at 0.2 per sq.km.) and ACT (Canberra, the national capital). Then in 1908, it was decided to add an extra point to the Commonwealth Star for Papua New Guinea (and a clatter of other 'colonies'). The flag was chosen by King Edward the potato Seventh after a nationwide competition with a prize of £200. Five people came up with essentially the same design: a schoolboy, an apprentice optician, an architect, an artist and a [Kiwi] ship's officer who shared the prize worth about $25,000 in today's money.

Note also that Australia acknowledges one more star Epsilon Crux to their Southern Cross than does New Zealand but only gives it 5 points and smaller size to indicate that it is much fainter despite the fact that it is actually much closer than the others. Seems a bit arbitrary to me (and the Kiwis) because the actual constellation [R Epsilon Crux pointed at] is far from black&white but has lots of background and nuance.

There is a strong republican movement in Australia which periodically erupts into a campaign to change the flag. The run up to the bicentennial in 1988, for example, saw a flurry of activity among the vexillological radicals. But the people who make decisions are old and if they didn't themselves wear an ANZAC slouch hat, their fathers, uncles and grandfathers did.  So there is a lot of inertia in the system which is cemented by such patriotic stuff as National Flag Day. It's hard to change things which are cemented.  Nevertheless there is a Flag Society of Australia Inc. which promotes the discussion of flaggy things in the country.  They have a long list of alternative flags. 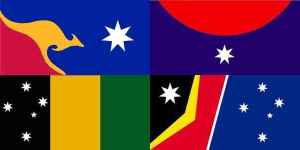 Here are 4 of the many. Top: Kangaroo by George Margaritis 2000; Uluru upside down by Friedensreich Hundertwasser 1986; Bot: Defaced tricolour by David Couzens 1993; "Reconciliation" flag with boomerang by Brendan Jones 1995. Many of the other suggestions feature kangaroos, boomerangs, green&gold, southern crosses and other familiar symbols that amount to clichés.  Harumph.

Other Flaggy-Blobby Links
Posted by BobTheScientist at 22:18