As decreed by the Council of Europe in 2001, 26th of September is European Day of Languages:  To promote language plurality, intercultural understanding, and lifelong language learning. Some ways of promoting these laudable aims are more effective than others. Forcing official languages on an unwilling people is not always effective.  More people speak Welsh like a native in Wales than speak Irish in our Republic. Nearly 100 years of crappy and pedantic Irish language teaching in schools has failed to inspire a lifelong love (and use) of the language here, except in a small minority. The fatuity of maintaining the primacy of Irish in all official business was brought into focus this last week. A Romanian national, resident in Ireland, had his conviction for drunk-driving quashed because the docket spat out by new breathalyser machines was monolingual in English. His clever-clogs lawyer desired to keep his client on the road until he kills someone, and a High Court judge felt that the Law [requiring bilingualism everywhere official] trumped Justice or common sense. That establishes a legal precedent which should allow a few hundred similar cases to be thrown out. That is a Bad Thing. But if you hear about some quirky aspect of language on The Blob, you might go and find out more. That is a Good Thing.

The Council of Europe reckons that the top three European languages are Русский Russian [150 million speakers]; Deutsch German [95 million] and Türk Turkish [80 million]. WTF?  I didn't know there were that many Turkish Gastarbeiter slaving away in Berlin and Hamburg. Well, there aren't. The Council of Europe is bigger than the EU and includes the whole of Asia Minor [=Turkey] as well as Russia as far as Владивосток Vladivostok and Камчатка Kamchatka.  Much like Israel competing in the Eurovision Song Contest.  Here's a handy Venn diagram [strangemaps via boingboing] with implicit quiz : 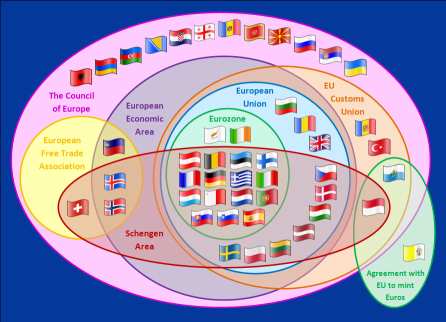 There are six red-and-white-only flags: Switzerland, Denmark, Poland, Malta, Georgia and . . . [one more: it's small]

Q1. What is the official language in Andorra?
Q2. What national flag flies over the town hall in The Åland Islands and what is the official language?
Q3.Where do people speak Llanito?
Q4. Is it sensible for a Sinti speaker to go back to the Punjab to find her roots?
Q5. Draw a tree of relationships among the languages spoken in Metropolitan France: Alsatian Basque Breton Catalan French Occitan (we'll spare you having to slot in Tuareg, Vietnamese, Arabic).
Q6. I've given you an earful about the linguistic argy-bargy in Belgium; what is the recognised minority language in the Netherlands and how many speak it?
Q7. What is the third official language in Luxembourg along with French and German; and is it a real language or a dialect?  How long is a piece of string?
Q8. There are less than 2 million people living in Autonomna Pokrajina Vojvodina, an autonomous region of Serbia. How many official languages are there?
Q9. Is Aragonese spoken anywhere in Middle Earth?  It would help because fewer people speak it in the Pyrenean foothils than speak Irish in Ireland.
Q10.  Is Scots a real language or a piece of string?

Try today to greet someone in a language other than your own?
Posted by BobTheScientist at 09:30