It's your gut talking 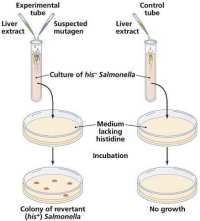 Back in college, when I was studying genetics before molecular biology had really taken off, we had to do something to fill the curriculum for two years. One of the topics was testing for potential carcinogens in the environment.  We knew that one of the causes of cancer was mutations in the genes which stop cells growing when they are crowded up against each out. Without these genes you had uncontrolled growth of cells, which is a pretty good definition of cancer. The way we tested the mutagenicity of stuff [R. Ames Test] was to spread out a 0.1ml drop of concentrated bacteria on a petri dish that contained insufficient nutrients for them to grow. If they did grow, then you could suppose that a mutation had occurred which allowed them to make whatever was missing from the medium. This might occur spontaneously, and with 10 million bacteria in the drop, one of them changing was not impossible; so you needed to run a controlled experiment a) plating out the bacteria on the nutrient-deficient petri-dish and b) plating out the bacteria and a potential mutagen on the nobbled petri-dish. Count the colonies on each plate and do a statistical test and you knew what was mutating bacterial DNA and so what was likely to mutate human DNA . . . and cause cancer. It was a method dreamed up by Bruce Ames at U.Cal Berkeley.

Actually, the Ames Test had an additional layer of complexity.  It acknowledged that the liver is the metabolic kitchen of the mammalian body.  Loaded with enzymes to cleave this and add that and detoxify the other, the liver will process pretty much any chemical and reduce it to its component parts or at least change it into something different. It could be that some perfectly innocuous additive to Purina Cat Chow was converted into a potent toxin by the cat's liver and it goes blind and dies. So there was a third option in the full Ames test: c) plating out the bacteria and a potential mutagen and an extract of rat liver on the nobbled petri-dish.  One of the most startling events of my undergraduate career was adding a drop of own brand Quinnsworth Lemon-Lime shampoo to the Ames test and two days later seeing a constellation of bacterial colonies scattered across the petri dish. That shampoo was a fluorescent lime-green in colour that shouted mutagen quite loudly - that was why we tested it. That was just great - we were doing real science - nobody had done that experiment before and they probably should have done. My other triumph was working through a bomb-scare to see polytene chromosomes.

This all came rushing back to me because of the Nature Supplement on Liver Cancer which I have been reading like a really gripping novel.  One of the essays in that compendium is an investigation of the role of the intestinal flora in the cause and cure of liver cancer. That might seem a bit of a long shot, until it's pointed out that everything we eat is taken from the gut up the hepatic portal vein direct to the liver. There are 100 trillion bacteria in your gut of maybe 10,000 different species each containing up to 6000 different genes.  That's 60 million potential enzymes for converting harmless substance A into toxic substance B.  There is evidence for this quite out-there hypothesis in that rats which are treated with oral antibiotics are less likely to get liver-cancer than reg'lar rats.

Given that observation, any trained scientist will be down in the guts looking for likely suspects for a mechanistic explanation: which chemical A is being converted to which chemical B that is known to be carcinogenic? The accusing finger is currently pointing at deoxycholic acid DCA a "secondary bile salt" not a million miles, chemically, from cholesterol [see R]. The story is that the liver manufactures bile-salts which are stored in the gall-bladder and secreted into the duodenum to help absorb fats.  Having done that, the fat is unloaded in the liver and the bile salt is recycled through the gall-bladder. We've met a bile-duct before, getting unblocked.  Some of the normal constituents of the intestinome (the gut flora) convert the 'good' bile-acids into DCA which is not only not good, it is positively toxic not only to humans but also to cohorts of other bacteria. It is likely that the DCA-making bacteria benefit from the conversion by creating a bit of lebensraum for themselves by laying a little light holocaust on their neighbours.

That's a story you can tell to Joe Public, untrained in science, as an internally consistent and coherent explanation of what might be actually happening at the interface between the microbiome and the hard-working liver. It's therefore good enough to write a grant application to pull in a $million$ and start investigating how you might be able to put a spanner in the DCA production works.  One idea, for example, would be to genetically engineer some street-cleaning bacteria that hoover up DCA and convert it back to bile-acid. That way you leave the intestinome intact and just tweak it to your bidding.  Broad-spectrum oral antibiotics really do damage to the delicate balance 'down there' and should only be used as a last resort. FMT fecal-microbiota transplant is one way of delivering bacteria to the dark places to do good works.
Posted by BobTheScientist at 06:32