Minnesota is about as far from the ocean as you can get in North America - the nearest saltwater is 1500km NE in Hudson's Bay. In a Soviet style centrally managed economy the U of Minn wouldn't be seen as a sensible place to devote a scientific life to the study of sea-weed. But the principle of academic freedom allows for all sorts of logistically daft research.  Egyptologists work from the British Museum in London (3500km SE); while fossil-fish expert Neil Shubin lives in Chicago but carries out field-work in the Canadian Arctic (4000km N).

Josephine Tilden was born in in 1869 in the corn-belt of Iowa but her folks moved to Minneapolis when she was a child and that's where she went to school.  She got her BSc from U. Minnesota in 1895 and stayed around to obtain a Master's degree whose results were published in her first paper On Some Algal Stalactites in Yellowstone Park. In 1897, her Alma Mater took her on as an instructor to teach the students about Algae to round out their botanical education. She was the first woman on the academic pay-roll of the University.  The following year she was off to the clatter of islands that fill the Strait of San Juan de Fuca between the USA and Canada and between the massive Vancouver Island and the mainland.  We've been there before at Tommy Thompson's marine station on McConnell Island. Tilden had worked out that a very low tide was due in the area in early August and was determined to sample algae which are not normally accessible. It was all very derring-do in a classic late Victorian way. Tilden was paddled to her proposed field-site in an open canoe accompanied by her redoubtable mother as chaperon. The rare-in-Minnesota seaweed which she pulled if the ocean floor and pressed into her collecting books formed the start of a massive collection of algae from all all over the wet world. 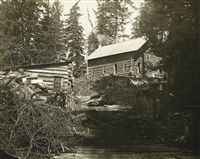 Thomas Baird, the chap who paddled the canoe, was also the owner of the foreshore on that remote stretch of Vancouver Island. He was so impressed by the doughty dedication of his companions that he offered to sell Tilden enough property for a cabin to serve as a research station to shelter her and her students when she came back in subsequent Summers to carry of further research. As we saw on Sherkin, longitudinal studies of the fore-shore are really important to establish the base-lines of natural variation in abundance and diversity. A single sample is barely scientific.  From 1901-1906, faculty from U.Minn brought students to this remote spot: presumably by train, ferry and open boat.  And not only to collect sea-weed: the geology, botany and zoology of the area were also ripe for research. The Minnesota Seaside Station [R from], run by Tilden and her boss Conway MacMillan, Professor of Botany, served to educate a couple of dozen students in each of those years. The area is now called Botanical Beach and is famous for its tidal rock-pools and foreshore, it looks busy.

MacMillan and Tilden were so caught up in the value of the place for scientific research and teaching that they petitioned the University to take the Station under its financial and official wing . . . and were refused.  The University only saw an administrative nightmare: how to audit and maintain a property that was 2000km distant and in a foreign country. MacMillan was angry enough to resign in protest. Tilden was not so easily put off and stayed on in the University, undertaking some enormous trips across the Pacific and round the world collecting Algae to get a more complete and comprehensive picture of the distribution of the several species. She was a bit obsessed by algae but was also able to see them as part of the web of life and was vocal, and far ahead of her time, in her concerns about the effects of over-fishing and oil-spills on the whole marine ecosystem.  In 1924, she took a party of 15 to a conference on pan-Pacific conservation in Hawaii, and then expected the University to pay their travel expenses. It was only $15,000, she said, a snip compared to the $750,000 raised for the college football stadium.  She must have been a royal [as in Princess] pain for the poor people working in the finance department.  A few years later she set off on a round the world collecting trip with a group of loyal students, who are asked to chip in $1000 each towards expenses. It was successful if 50+ steamer-trunks full of specimens shipped home to Minneapolis is success.  Her new Head of Department had to deal with a flurry of bills for shipping and incidental expenses as his maverick instructor romped round the world with her train of students all getting wet to the knees twice a day as they looted the fore-shore for material. In 1937 she was asked to retire and there was a war over who owned, and should have access to, 'her' specimens which had been paid for by the University.  It's a classic early IP tussle.

She retired to Florida and lived in straitened circumstances for another 20 years before bequeathing 'her' collection to a friend and fellow oceanobsessor from San Francisco. The specimens eventually returned to UMinn where they sit gathering dust today.  It's all in the essay The Algae of Acrimony, which is such a neat title you have to read it.  Science needs people who are so certain they are right that they forge ahead beyond the current frontiers; but equally science needs people to rein these pioneers in, lest they disappear off the rails into whoowhar-land. Someone - that's most of us in science, indeed - has to plod along carefully picking up the pieces and filling in the gaps and someone has to pay for it all.

Now N=45 Women in Science on The Blob.
Posted by BobTheScientist at 06:22