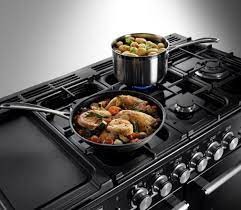 Hope y'all are fuel-fixed for the winter. Energy prices have spiked because of events at the other end of Europe. We cook on a mighty Rangemaster Nexus [as L, not so clean, less meat] dual-fuel cooker: 3 electric ovens, 5 bottled-gas burners and a plate-warmer / bread-proving drawer. But we also have a Waterford 104 wood-burning stove with a flat top and have cooked on that in an emergency. A couple of un-emergency times we've cooked fondue on the 104 which conveniently projects enough out into the room so that 6 reasonably polite [elbows in!] people can sit and dip together. Standing orders in Chateau Blob include that the brave Waterford 104 has both kettles full of water whenever there is heat within to be captured.

Last Saturday just after lunch, the electricity flipped OFF subjecting a few parishes to a power cut. I was out chopping wood and hadn't washed the dishes but I wasn't too concerned, because we don't live in an Oblast, and as the weather was good and, so the fault was likely to be isolated and fixed soon. Winter storms bring down power-lines everywhere and it can take hours or even days to restore the 'lectric.

The WWWireless soon reported that the fault was located and would be fixed by 18:00, so we kept calm and carried on rather than flapping about making contingency plans - candles, torches, water-conservation, keep freezer closed. But shortly before 6pm, the resolution time was pushed out to 7pm and then to 20:30. And that was how I finished cooking a slightly sloppy pan of potato latkes by the light of a single candle. Because sunset was at 18:03 and it was full dark inside [astronomical twilight] by 19:00.

It didn't help that the gas started to sputter just as I started cooking; and I had to switch cylinders outside round the back of the house. Last time I bought a 34kg gas bottle it cost more than €100 and it won't be that cheap when I replace this one. We have two cylinders connected to the cooker by a flip-valve. In the old, only gas cooker days, when we were catering for four, a 12.5kg cylinder would last exactly 3 weeks - baking all the bread is not free.

I'm not make predictions about energy availability this winter but this event has been a handy wake-up call to put on my prepper hat. And, not for the first time, I've been reflecting on how casual we are about the utilities of modern life. I don't need to clean out the range in the morning before a kettle goes on the hob and, when it comes to cooking or reading, I defo don't heed that it is  dark outside . We don't have small children, or elders, or chronic illness in our home, so I won't whine if we have to endure a few rolling power-cuts this winter. And being retired, I don't have to make tea / eat dinner / take a shower between 17:00 and 19:00 when national power consumption maxxes out. Take care, take it handy.