Thursday 13th October, we went down to harvest all the apples in the "Lower Orchard". In pursuit of a trifling DAFF grant ten years ago, we planted 12 apple treelets of 10 different varieties. The grant paid for us to fence off the last 10m of the field across the lane: the only part of our property which is below 200m above datum. In those days, and presumably today, The Man deems ground higher than 200m to be unsuitable for hardwoods, including Malus domestica, the common-or-orchard apple. 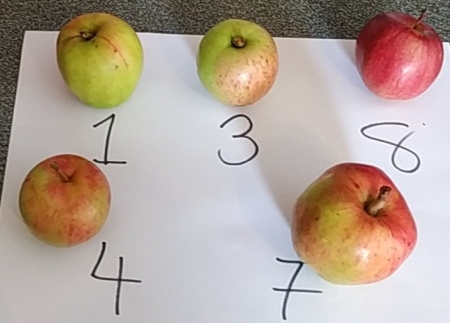 According to our records 1. Valentine 3. Ballinora pippin 4. Kilkenny pearmain 7. Valentine 8. Ballinora pippin. But this is rather unlikely to be correct, because apple #8 is conspicuously different from #3 which is supposed to be of the same variety. All the treelets came from Seedsavers in Co Clare, which page has apple type [cook/eat/zoider]; pollination times and harvest range.

The verdict on these apples and their care-and-attention is "could do better". The reason why Widow's Friend is numbered out of sequence is that we couldn't see her head above the sea of bracken which is invading the orchard from the West. It was only as we were leaving that I almost bumped into the top of the 2x2 square stake barely above the tangle of dying bracken. But the old lady is still holding on there despite all the shade although much diminished.

The same morning we gathered all the apples, I put all but the least wretched fruit from #3 into the kitchen sink and gave them a good rinse. I then halves them, boiled them and bottle 3 jars of apple pulp against an uncertain Winter.

My contacts tell me that 2o22 has been a record year for apples, so nobody is going to be grateful for a presentation pack of apples, no matter how succulent and organic they be.