Will walk with water

I have notions about how to walk places.

During pandemic breaks, I had a short handful of engaging walks along the tow-path of the Barrow Navigation. Walking increases blood-flow and some of that bleeds into the brain, so thinking may be a bit sharper out in the breeze. And it's cheap: two coffees and a slice of cake cost me €15 on a different mentoring gig . . . not to mention sitting in a warm fug of microdroplets from strangers' spittle for an hour. 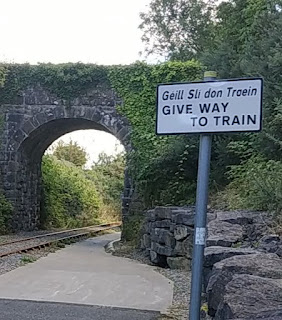 The Beloved's Bruv + 1 were over in Ireland for a week in the middle of September. They were heading to a different hemisphere for who knows how long and so we went for a walk beside a different river along the Glasbhealach na Déise. Ireland used to be criss-crossed with 5,500 km of railways, at least partly because much of it is flat and so cheaper to engineer rights-of-way. There once was a railway between Waterford and Dungarvan (and Fermoy and Mallow). This involved many bridges, culverts, embankments, tunnels, viaducts; some spectacular. The railway service was closed in the 1960s having run at a loss for too long. But re-opened as 46 km of car-free roadway in 2004.

It's wonderful. We did a modest section of the route from Killoteran to Kilmeaden where the path hugs close to the River Suir and the dinky little toy train [€10 each seat] runs beside the track. The station at Kilmeadan is a bustling café where we paused for coffee in the sunshine, before heading back. The sign [R] is clear about who gives way to whom w.r.t. trains. But things are much less clear with pedestrians and bikes. I'll confess to feeling a bit h(a)unted by cyclists in lycra but apparently without bell. 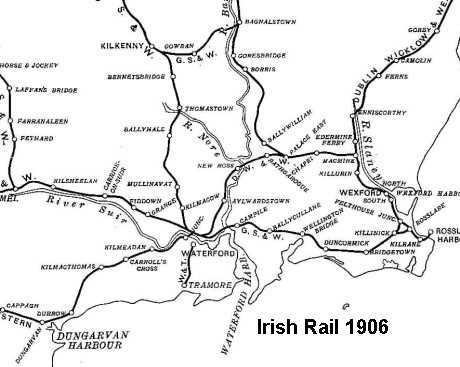