The last Edge of the Plain [prev] investigated by James Crawford is The Great Green Wall of trees which is intended to snake across Africa from Senegal to Ethiopia delimiting the southward march of the Sahara. The edge biome between desert and forest is known locally as the Sahel. By some calculations this strip of savanna is the ideal Goldiloxian habitat for Homo sapiens. Not super-surprising because our best guess is that bipedal proto-humans came down from the trees in such an ecosystem in East Africa and evolved to fit the local conditions. Of course, human beings have spread to colonize every scrap of land on planet earth but to the nearest whole number nobody lives in Antarctica. Even in Yukon Territory 40,000 people have 474,391 km2 to roam across [too cold for comfort alert]. otoh 'nobody' want to live in Australia [too bloody hot, mate] where the density is about 3½ people per km2 or < 1 if you exclude the capital cities of each of the eight territories. 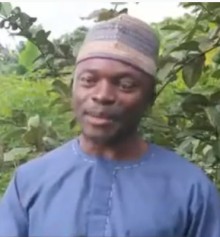 The Great Green Wall [propaganda] is not therefore a barrier against desertification for a bunch of bone poor black pastoralists and subsistence farmers. It is rather a recreation of Eden, even if it's a bit strung out. Crawford interviews Tabi Joda [L], the living force behind the project One Billion Trees for Africa. That's basically one for everyone in the audience, if the audience is Africans. There has been plenty of political grand-standing buy-in from the countries directly involved Senegal, Mauretania, Mali,  Burkina Faso, Niger, Nigeria, Chap, Soudan, Ethiopia, Eritrea, Djibouti and a lot of trees have been planted but the commitment to prevent those trees become an hors d'ouevre for the nearest goat is patchy. As with a lot of these grand projects, planting a whip takes 5 seconds, but someone has to commit to protecting, nurturing and watering that plant for 5 years before it starts to yield avocado.

And it may be, as with my sister's tree-efforts in Scotland, that a stepped / staged protocol may be better in the long run. Plant islands of trees and ring-fence them . . . and use those established woodlet woodlots to anchor further adjacent growth. Hysterical urgency to get it all done Now before the planet conflagrates may result in nothing at all. Steady lads, it took decades before the trees of Ascension Island started to attract rain. But if it works, it works for us all. Creating an Eden in Africa will stop young men gambling all on a leaky Zodiak heading for Lampedusa. Some folk would prefer picking their own fruit at home, than picking fruit for Conglomerate Foods in Britain.