In July 1984, Mary Manning was just 21, still living at home, and working the tills at Dunne's Stores [better value, beats them all, every time] on Henry Street in Dublin. She joined the union [IDATU that became Mandate later]  The managers were almost all men, the actual workers were almost all [young] women . . . and the regime was heavy on pettifogging, patronizing regulations bordering on bullying. The bullying centred up when any of the "girls" seemed to be kicking over the traces.

So when IDATU issued a directive that members should sell nothing exported from the Republic of South Africa. The Irish education system, especially for working-class schools was a series of stories with far too much about the Bog of Allen and turf-fired power-stations and nothing at all about Africa except that Irish missionaries were saving souls out there. Mary Manning knew that Outspan grape-fruit came within the ambit of the union directive and explained to a customer that she couldn't run a pair of these forbidden fruit through the register. The customer was understanding but the line-manager, who was hovering there waiting for such a transgression of company diktat, was not. When Manning resisted the bluster, she was suspended and nine other shop-workers walked out in sympathy. It had to be an official strike, because the union had precipitated it with their dogoodnik anti-apartheid policies. 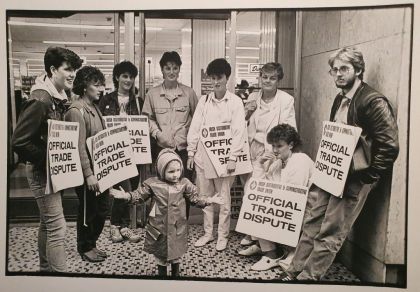 Dramatis personnae: Theresa Mooney, Catherine O'Reilly, Karen Gearon, Veronica Munroe, Alma Russell, Sandra Griffen, Mary Manning and Tommy Davis (not in photo - Dorothy Dooley, Michelle Gavin and Liz Deasy). Note to editors, writers, re-churners. There is a lot of errors / variation in the roll-call out on the interwebs. Sandra is probably Griffin. Catherine might be Cathryn. Veronica is known as Vonnie . . . and is not a Murphy. Alma is a 2-L Russell not Russel and she's defo not Alma Bonnie. 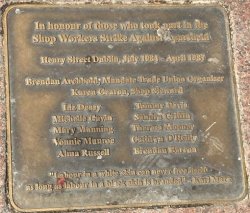 You might think that a brass plaque [R], which will be there after I R dead, would have the correct roll-call. Karen Gearon; Liz Deasy; Michelle Gavin, Mary Manning; Vonnie Munroe; Alma Russell; Tommy Davis; Sandra Griffin; Theresa Mooney; Cathryn O'Reilly; Brendan Barron. It includes Brendan Barron, who joined the strike the following year from the Crumlin branch. Next year? Weren't they hoping it would all be sorted out in a couple of weeks?? Mebbe, but the strike was still on their pickets in April 1987! 33 months after those grapefruit started the ball rolling.

Last year Mary Manning was interviewed about her book Striking Back. One of the great insights is that she and and her strike-mates used their adverse circumstances to educate themselves about the correct pronunciation of apartheid The Rights of Man, product labelling and who were your real friends. And begod it made a difference. The Irish government eventually banned the import of South African produce: only took three years to get a complacent patriarchy to follow the righteous lead of two handfuls for working class people. Also note that Ben Dunne, the CEO of Dunne's Stores, was paying off the Taoiseach Charles Haughey synchronously with institutionally abusing his employees. So Fuck Him too.

Brendan Archbold their Union mentor came up with a graphic picket-line soundbyte for the politics involved: "you have to imagine South Africa as a pint of Guinness- the vast majority of it is black and a tiny minority is white and like a freshly poured pint, the white sits firmly on top of the black".

There is a Ewan McColl ballad!  And one by Sandra Kerr.