How quickly they forget, eh?  My time-line for 2020 is wrong in my head. I had this memory of  standing in the dark outside the village hall in Chetnole after burying my mother's ashes and people talking about a novel Corona-virus which was killing people in Bergamo. I have the sense that it was the last time I was in England. I've rationalised that as happening in March, but The Blob and our [definitive] kitchen kalendar records that me mother dies on 9th Jan, was cremated on 20th, memorialized and interred on the 26th. Indeed, I made another estate-triage trip to England with Dau.I 22-24 Feb.  And it wasn't until the last week in Feb that lock-down started in Bergamo. 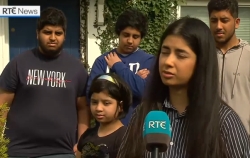 Dr Samar Ali [R with her devastated sibs], daughter of Dr Syed Waqqar Ali, gives tribs to her dad who worked in ICU in the Mater Hospital, Dublin, copped a 'Rona at work, spent 90 days on one of his own ventilators and died in July 2020. He became the taking one for the team poster-boy, in early media coverage of Coronorama. It's nice to note that someone, with half their genes in common, has graduated Med School and is now filling her father's shoes.

At some stage in 2021, I trawled through The Blob and abstracted all my essays related to the pandemic: it made a chunky A5 book almost as fat as my Women in Science pieces. But my hot-takes are patchy and of 'mixed' quality and nothing like a coherent record of what it was like on the ground. That deficit has been patched by A State of Emergency by Virgin News reporter Richard Chambers, who was there at all the briefings and who also had access to a lot of talkative pols and civil servants. One of Chambers' points is that the lines between politics, media and public health have been blurred over the last 2½ years. Our own Tony Holohan came to rival Tony Fauci in the USA for being in front of cameras a lot. The government were happy to shirk responsibility for taking intrusive decisions about lock-downs "our hands are tied, we are just following best medical advice / practice". And likewise have yet to apologize for making a disastrous miscalculation about giving everyone a Christmas to remember by opening the party-gates too early [source]:

There were more cases of SARS-CoV2 in January 2021 than in the whole previous year. As a competent journalist Richard Chambers has personalised the nation's woes by highlighting the tragic tales of a few, including the Ali family. Another story is about an elderly lady living in a nursing home who was lucid and pro-actively careful as care home took a bite in the neck. But she got sick and died anyway, just days before the vaccine roll-out reached her. Chambers also has turned his ear to a number of his high-ranking political contacts to get a personal hot-take on events.

We are, as you will have noticed, still under the dark clouds of Covid-19. But Chambers had to declare a wrap on his book sometime or we'd never get to read it. His end point, not without logic, is the very end of July 2021when vaccines were sufficiently abundant to be rolled out to all-comers in public vaxx centres across the country. Vaccine take-up rate in Ireland was among the highest in the World. It's still too early to have the final post-mortem on How Ireland Beat Rona but I think that we're in good shape to meet future epidemiological challenges because the response to this one has been a learning curve. It's a much better, less tendentious, book than Michael Lewis's The Premonition: A Pandemic Story which I reviewed recently.