There are a few, well-churned, stories of how a creative insight came to someone in a flash at a particular place and a particular time.  Henri Poincaré (1854-1912) was a French mathematician known as The Last Universalist (le dernier grand savant universel).  As I quoted J.B.S Haldane earlier "Keats and Shelley were the last two poets who were at all up to date with their chemical knowledge” so Poincaré knew all the then available mathematics.  Einstein was writing his key papers before Poincaré died and after his death things mathematical went exponential so that no single brain could retain it all.  As well as making major contributions to several different fields of mathematics, Poincaré was also a philosopher of science with a notable interest in the where ideas spring from.   In his 1908 book Science and Method he describes one of his own experiences getting onto a bus in Coutances in Normandy: "At the moment when I put my foot on the step the idea came to me, without anything in my former thoughts seeming to have paved the way for it, that the transformation that I had used to define the Fuchsian functions were identical with those of non-euclidean geometry." I can see that I'm going to have to come back to Poincaré later, because he is really so interesting.

Poincaré will be always with us, but not the fleeting anniversary of the discovery of quaternions by Ireland's own polymathematician William Rowan Hamilton: that comes but once a year.  I've mentioned him in passing before acting a bit of a groupie over the Ordnance Survey team that was mapping Ireland in the the 1830s. Hamilton was born about 50 years before Poincaré, so he had much less difficulty mastering all the mathematics then available, because he was quite as smart and there was much less maths.  He was appointed Professor of Astronomy at Trinity College Dublin at the ripe old age of 22; the position came with a house at the Dunsink Observatory NW of Dublin.  On 16th October 1843 he went for a stroll with his wife along the Royal Canal, and as he passed under Broom/Brougham Bridge on the tow path he had an amazing revelation about mathematical relationships, which he hastily scratched into a stone on the bridge:

NUI Maynooth hosts an annual pilgrimage walk from Dunsink Observatory to Broom Bridge or you can just go out on the Maynooth commuter rail and descend at Broombridge.  When I was last there 20 years ago, on pilgrimage with a friend of mine who had a degree in Mathematics from Cambridge, the area was all derelict rough meadows filled with old bedsteads and piebald horses.  Now, as you see from Google maps, the Celtic Tiger has passed through depositing now derelict rough sheds and warehouses. 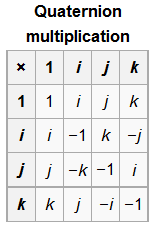 For those with elementary maths, Hamilton's formula plainly does not compute because it violates the convention that minus x minus = plus, so there is no way two identical things can be multiplied together to make -1.  But Hamilton's equation has a bunch of such assaults on this agreement i x i = -1; j x j = -1 etc.  For those who have a tiny bit more maths, the Quaternion times table shown on the left violates the principle of commutativity.  The elementary maths chaps are leaving for a strong cup of tea at this stage because they can't remember ever being told about commutativity.  A commutative relationship is one where the order of application doesn't matter.  Regular multiplication and addition are examples of commutative transformations:  3 x 2 = 3 x 2; 7 x 6 = 6 x 7; 15 + 5 = 5 + 15; etc etc. the times-tables are much easier because of this symmetry, as is adding up a long column of numbers - the answer is the same if we start at the bottom and add from there or if we start and the top and add downwards.  Non-commutative operations include minus and divide:  5 - 3 .ne. 3 - 5 and 3/5 .ne. 5/3. [.ne. - not equal]
From the table it says that i x j .ne. j x i .  It does matter which order you multiply the elements in quaternion mathematics.  You can, idly, use the table to verify Hamilton's bridge-scratching "ijk = -1" (it's the same as i x j x k = -1) can be processed in two steps:  i x j = k ; k x k = -1.

"So far, so what?"  I hear you say, and for 100 years that was the consensus.  Quaternions were a clever game that mathematicians used to play with, trying to discover inconsistencies and mapping the results onto other weird branches of mathematics. Then it turned out that they were an extremely powerful, compact and useful way of representing 3-D movement, particular turning.  Where did we need to mobilise that insight?  First in space travel, controlling the yaw, pitch and roll of Gemini, Soyuz and Apollo with minimal expenditure of fuel.  Latterly, quaternions are key to being able to write code for computer graphics that is compact enough to execute in real time.  Without William Rowan Hamilton's insight 170 years ago there would be no Lara Croft, and the world would be a far duller place for 13 year old boys.
Posted by BobTheScientist at 06:32