Robert Macfarlane is the poet's perambulator.  He writes like An Old (although he's younger than The Boy) and is a regular contributor to Resurgence, the English alternative woo glossy magazine. I'm a bit pissed off with Resurgence since they refused to take my essay on the process of pilgrimage [Santiago etc. bloboprevs] in the 00s. They said that they had Santiagogo covered by an upcoming piece by one of their regulars. We had and still have a sub but no such article has appeared. I may have transferred some of my resentment to Macfarlane as a usual suspect quite likely to write about the process of pilgrimage; but I never really got into his books.

Which is a shame because his writing really is my jam. Adjacent to Meg Lowman, the Sheldrakes, EO Wilson, Tim Richards. Indeed Macfarlane was the literary executor for his good friend Roger Deakin. And i'm pretty sure he was cited or referenced by Richard Nairn. I did finally read Macfarlane's The Old Ways [2012] and was entranced by his account of a voyage over the whale-road to the Shiants.

My latest audiobook is Underland: a deep time journey [2019] by Robert Macfarlane.  It is read, effectively, by Roy McMillan although we could have done without the Norwegian accent. First time I've heard the tree pronounced as it is written rowan rather than roe-an. The audioPublishers Penguin have used the change in medium to add some very understated background sounds. I had to switch off at one stage because I heard a distant dog barking which turned out to be on the tape.

At some point in the introduction Macfarlane says that Underland is the book which all his previous work has been pointing at and laying the foundations for. It's a compendium with a theme, like Tim Richards' Outposts. The theme being the world beneath. There is a [good] chapter on the wood wide web and the vital importance of fungi for the sharing of resources among the plants of the forest which is largely informed by the beautiful Merlin Sheldrake, a family friend.  But, having read Sheldrake's book, I know all that. 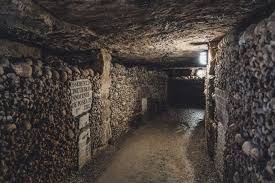 What I knew less about was the labyrinth beneath the streets of Paris. The Ile de France is bedrocked with limestone which has been extensively quarried for building material. Only occasionally do the citizens fall into the abyss as a section of tunnel and gallery subsides under the weight of years. Such an incident starts off Parisians: an adventure history of Paris by Graham Robb. But really, Macfarlane's description of the extent and purpose of the tunnels is much better. Perhaps because it is informed by Macfarlane's actual adventures with tunnel rats beneath the streets of Paris. In one escapade he spent a week down below without seeing the sun; camping out on stone shelves and benches and attending wild parties in the sous-terraines. Pictures and history at SoloSophie [L]

otoh I knew nothing at all about the Boulby Underground Laboratory near the River Tees on the NE coast of England. The lab is down there because, among other ventures, they are clocking the appearance of neutrinos and evidence of Dark Matter far away from the electronic jangle of the above ground world. The UK scientific establishment couldn't have afforded to dig hundreds of feet down, let alone pay for the up-keep and infrastructure of such a facility. BUT they can piggy-back on a huge and largely invisible commercial enterprise to extract potash and other minerals from the deep. The visible surface commercial site at Boulby is big enough at 200 hectares but it services a network of tunnels over 8,400 hectares in area running back under the the North Yorkshire Moors and far out to sea. If these galleries are more than 1,000m below the surface they don't worry unduly about unplugging the sea above. It's hard to appreciate, after two million tonnes potash and halite have been extracted and brought to the surface, that none of this was here before 1968, when the first shaft was sunk. Chekkittout with the BBC [2m].

Macfarlane estimates that there are 30 million miles of man-made voids beneath the surface of the Earth: roads, railways, sewers, mines: enough to circle the globe 1000 times. 'tis a wonder folk don't fall through the surface more often. Good book, recommended.