Did I mention that Storm Eunice delivered a source of firewood 12 days ago? I did. It took all of the following week to put manners on the mess, so I could see the wood for the trees, rocks; branches-under-tension; branches under compression; wire fences and the other manifold hazards of chain-saw land. I've delivered so many ivy branches to to the sheep that they stopped eating the stuff. It may not be toxic but it could sure get boring, I guess. 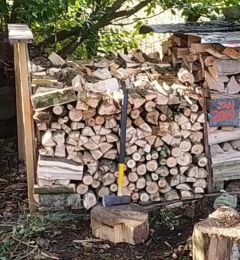 Monday 28/Feb, I touched up the teeth of the chain with my Stihl file gadget and went at the downed branches. Trees don't become firewood until they are reduced to a size that will fit in the stove! It is always reculer pour mieux sauter: a neat enough pile of branches becomes a ragged splat of logs big and small but all less than 14 in = 35cm long. Longer logs means fewer cuts, so a bit of min-max optimisation is required.

Tuesday St David's day, I clocked our first flowering daffodils [much later than those of the flatlands NWES of here] in passing. Then I loaded my current audio book and finished loading the ash into its stack. The final tally [see L] is 2/5ths of a cord = 1.4 stere [see how to measure firewood] ignoring the trunk which has a volume of about 0.75 cu.m. solid or another ~1 stere stacked - because cordwood is about 25-35% air-space. In addition, I salvaged about 10 cu ft = 0.25 cu.m. of laurel logs and loglettes. These are chock full o' prussic acid HCN and need a hella long time to dry out before burning. The last holocaust of laurel went up the chimney a full 12 years after being cut in 2008 by Tadek the Polish wwoofer [multibloboprevs]. To speed up the process I have, after several sleepless nights, contrived a cunning [patent pending] wall-rack just one log thick and oriented at right angles to the prevailing Westerly wind. Breeze is at least as important as temperature for drying logs.

At the far end of Europe, a little beyond Tadek's homeplace, while I was dragging around the aftermath of Sturm Eunice, the Russians decided to up the sturm und drang ante on neighbouring Ukraine. Ireland has not been slow about ethnic cleansing in my lifetime if you can credit that two people called McGuinness and sporting a similar shock of red hair could treat each other as, like, Other . . . and then decide to burn down their houses and spit on their infant-school children. Still, it's nothing like Breslau or Srebrenica. I am sure you have made up your mind about Ukraine, Russia, The Great Patriotic War and the breakup of the USSR. Not me. But I am surely fed up with Othering especially if it is weaponized by violent patriots and mendacious rhetoric. Dau.II realises more than most of us that a lot of the world's ills could be solved with some decent home-cooking and a cup of tea. She didn't need to push very hard for me to join her in sending some money to WCK World Central Kitchen which has become a little like MSF Médecins Sans Frontières except with soup not tourniquets. Here they are serving food just across the Polish border: 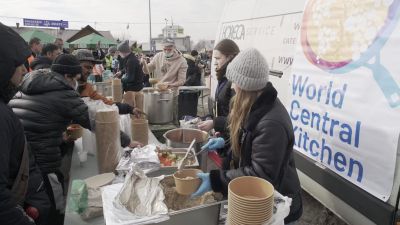